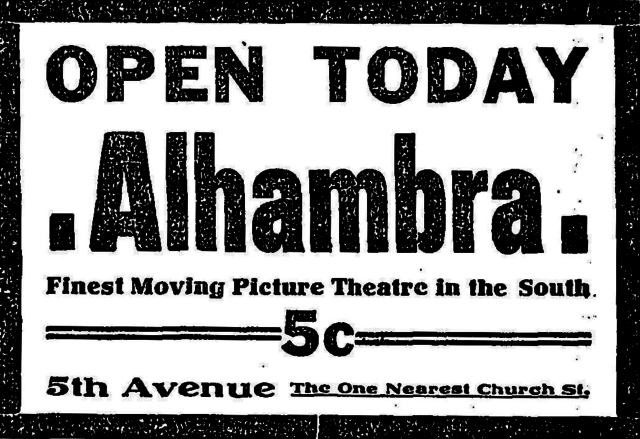 The Alhambra was one of the first theatres in Nashville to feature photoplays. The Rex was built next door in 1919. Please update if you have any additional information on the Alhambra.

Demolished. The entire block is now the Amsouth Center, a revival-style skyscraper. The theatre would have been where the bricked front plaza to the building is now.

Warren is right the 5th.Ave theatre was built later and near Church Street on 5th of course,it was were the Fifth Third Bank Building is now. there were about 20 theatres over time on about a three block area of downtown Nashville.The 5th.Avenue Theatre closed in 1960.The “New” PRINCESS/CRESCENT theatre opened in 1951 was right around the corner at 415 Church Street,right next to were Nashvilles first “SKYSCRAPER” the L&C Tower was built and opened in 1955.The L&C Tower still stands at 31 stories.

I may be wrong but I believe this theatre was not where the Amsouth Building is but between Commerce Street and Church right up from the Ryman Auditorium on 5th Ave, I will check more.

Sorry guys- the Fifth Avenue occupied the southerly part of what is now an expanded Walgreens. The stage entrance is still somewhat visible in the alley, though altered. The Fifth Ave was at 218, the Alhambra was next door to the south at 216 and then the Rex was at 214 one more door down as you went toward Church Street. All on the east side of Fifth Ave. There have been something like a dozen theaters in this block, mostly movie houses and now all gone and forgotten.

Thanks for the update Dave, I have seen photos of the 5th Avenue theatre so I knew about where it was but I did not know,about the others. What is confusing that when some of the theatres are listed they are put on with the wrong address to begin with.