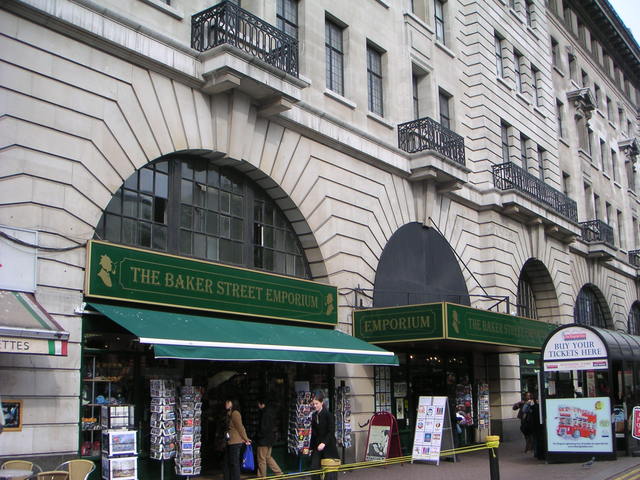 The Topical News Theatre was the only newsreel theatre to be built inside a tube (underground) railway station (there were newsreel theatres in Victoria and Waterloo mainline railway stations). This one opened on 7th December 1938 and was part of the Monseigneur circuit but unlike others, never took that name. It was re-named Time News Theatre in 1942 and remained until the Jacey chain took over Monseigneur News Theatres in June 1960. It became the Times Cinema screening feature films from April 1967, closed briefly for redecoration to re-open as Jaceyland in October 1967 and was taken over by film distributer Anthony Balch in October 1968, renamed (again) Times Cinema screening the double bill “Witchcraft Through the Ages” and “Un Chein Andalou”.

In 1972 Cinecenta took control and they twinned the cinema, re-opening it in March 1973 as two long narrow cinemas seating 171 and 169 known as Times Centa 1-2. Operating as a mixed art house and general release house for their tenure, it was taken over by Star Cinemas, then Cannon Cinemas, MGM and lastly by ABC. It closed 14th January 1999 with “Star Trek: Insurrection” and “Prince of Egypt”. The space was converted into a tourist souvenir shop which had closed by October 2018.

After reading the above, I send my heartfelt thanks to Mr Anthony Balch for providing me and all my friends with the most exciting and bizarre cinema programming in London in the late 60’s. After a few visits, we didn’t even bother to look at the listings – we just turned up, knowing that whatever it was, it would be good. For some special screenings, we used to pile in around 7ish in the evening and then pile out again at 1 in the morning, after watching several Polanski films and a few weird shorts. The following week, we’d be treated to Fred Astaire and Ginger Rogers and the week after that, it would be some extraordinary film by Bunuel. The strange thing was that we’d see the same people in the audience for all these films. And with the plethora of joints being smoked, you could cut the air with knife! It was at this cinema, in 1968, I first heard the Beatles White Album – it was being played as intro and interval music.

From marijuana to Bob Hope is rather a long stretch – nevertheless Mr Balch…. thanks for the memory!!!

Interesting Shamus,The Beatles had a office on Baker street at onetime I believe,and at the start of the movie A Hard Days Night the lads are running down Baker Street.

I’d forgotten about the Beatles' Apple store. It’s more than probable that Anthony Balch had a preview copy of the White Album, which is why we were all knocked out when it was played in the cinema.

I just looked up Balch on Wikipedia and found that, together with William Burroughs, he made some of the films we went to see. And although there was an aborted film with Mick Jagger, it does seem likely that he could have had access to preview albums – on vinyl of course! Sadly, Balch died in 1980 of stomach cancer at the young age of 43. But I see his films, or bits of his films, are all up on Youtube. Rogers & Hammerstein he aint! But if you’re into avant garde stuff that’s pre-Bowie etc, there are some interesting things to explore.

Thanks Shamus,I was aware of William Burroughs I will check Balch out on youtube.You are right it was the Apple store I was thinking it was an office.My memory is not as good as it used to be.

Hi, I’m writing about Balch at the moment for a BFI book and would be grateful for any memories of his programming at the Times or indeed the Jacey Piccadilly.

Regarding the programming, early Polanski films, Knife In The Water, Repulsion, Cul-de-Sac. Films by Bunuel – Un Chien Andalou, L'Age d'Or, Viridiana, The Exterminating Angel, Belle De Jour. Quite a few musicals, including Tea For Two with Doris Day, Easter Parade with Judy Garland, plus several of Fred Astaire and Ginger Rogers. Some Marx Brothers, I think and quite a few shorts, among them The Cut Ups, made by Balch and William Burroughs. The programming was bizarre, but that was half the fun!

I used to see cartoon shorts as a child here while waiting for trains home. At that time there was an entrance from the station booking hall. Later, after the space had been split, in the early 80s I saw “Les Vacances de M. Hulot”

Just to update the last sentence of KenRoe’s overview, in 2000 the cinema was converted to a Wetherspoon’s pub called the Metropolitan Bar. I have only looked in briefly so I’m not sure whether Wetherspoon have managed to include any of the cinema architectural details in the bar, like they did with the Coronet, Holloway Road.

SimonD, The J.D. Wetherspoon Metropolitan Bar is not in the former cinema space. It is located several yards to the left of the ABC Baker Street, in a space originally occupied by Baker Street station’s Buffet/Restaurant, adjacent to the station entrance.

Remember queuing to see “Schindler’s List” here (a day-of-release, Friday night full house) and “My Own Private Idaho” among many others. Its closure heralded the massive cull of Central London cinemas which continues to this day, making the capital a significantly poorer place culturally.