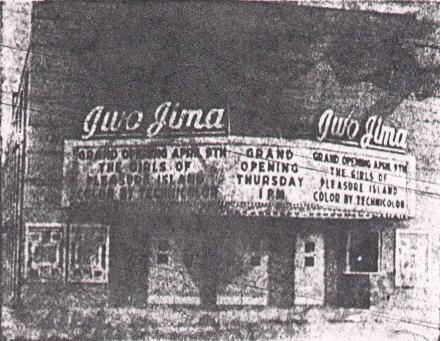 The Iwo Jima Theater opened on April 8, 1953. The movie playing that day was a comedy called “The Girls of Pleasure Island”. It was closed in 1985.

The building still stands and became home to WQSL, a radio station. By 2013 it had been converted into office space. Click the link below for a (poor quality) photo taken on the day that the Iwo Jima Theater opened.

I remember seeing the movie ‘Homebodies’ at the Iwo Jima in the fall of 1974 with my father. We were hoping it was going to be a suspenseful movie, which it was, but was also depressing – was about old people being forced out of their homes for new office buildings and their attempts to fight back. The weather that day outside the Iwo Jima was overcast and gloomy that day too. I was only 12 and that was my only time in that theatre.

Apparently this museum has the old marquee:
http://tinyurl.com/ycu478k

The Iwo Jima Theater’s design was also used by the Wilrik Theatre in Sanford; both were Stewart & Everett Theatres.

Does anyone know of the existence, up until the ‘60s, of two theaters on/near Court Street, the State and the Onslow? Am I just imagining that, as a kid, I saw ads for them in the Daily News?

The radio station has left the former Iwo Jima Theater, it has since been converted into office space.

Photo of opening day referred to in the overview uploaded (Link has been removed).

The reserved seat engagement of THE SOUND OF MUSIC played here first-run.

In 1967 I was in the fourth grade at Thompson Elementary which was 2 blocks behind Jacksonvilles largest theater The Iwo Jima with 599 seats. That year my teacher took our class for the 4 minute walk (2 by 2) to go grab some pop corn and watch “Old Yeller” as a class trip. It was so much fun!! Yes, we all cried at the end. Some 6 years later when I was 16, I got a job shoveling pop corn there. I changed hundreds of marquee’s and movie posters. I watched a parade down New Bridge Street once from inside the lobby. I stayed there for 5 more years until joining up with Uncle Sam and sailing the 7 seas for the next 20 years in the U.S. Navy’s Submarine Force. Now a Floridian at age 58, the years I spent working for Stewart & Everett Theaters, who owned Iwo Jima, was incredible. I was able to interact with thousands of customers, watch hundreds of movies from “B” films and everything in between & up to “The Exorcist” & “The God Father” all while earning 85 cents an hour. I lived on popcorn!! The Iwo was huge inside. It had 3 huge speakers behind the screen. The “Sound of Music” played there in 1965 for 12 weeks because of the huge seating capability. Don’t tell anyone but when a GREAT movie was showing, over the years now and then, after the last show let out on a Saturday night (non-school nite), my close friends and I would have our own private viewing of the film in that BIG theater. Thanks for the memories Stewart & Everett Theaters! I was able to get in for free to all their theaters…The “Center”, “Northwoods”, and especially the Drive Inn on Bell Fork road. I miss those fogged up windows!