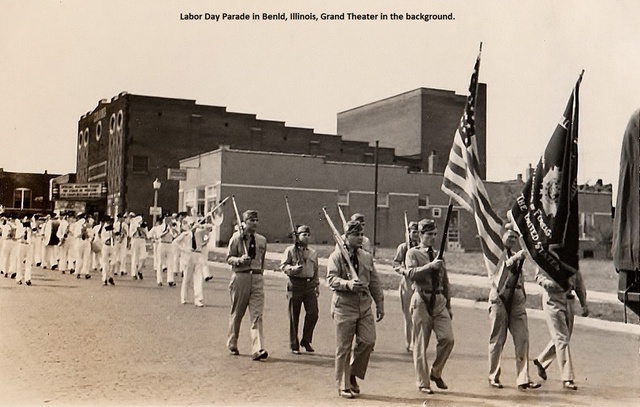 The former Grand Theatre is located on Central Avenue at 2nd Street. The Grand Theatre was opened in 1922, and seating was provided in orchestra and balcony levels. It was closed as a movie theatre in 1959.

In 1951, it was owned by Joe Katz. The May 30, 1951 issue of The Exhibitor reported, “In Mount Olive, Ill., Mrs. Josie Lawson, 500-seat New Grand, sold the house to Joe Katz, Benld, Ill., who also operates the 450-seat Grand, Benld. Katz plans to operate the theatre during the summer months with shows on Sundays, Mondays, Fridays, and Saturdays in the evening.”

Address is wrong, and this never served as the civic center. It was at 309 E Central, and was demolished many years ago. Would have been roughly across from the present library. If you go to: http://gis.hpa.state.il.us/hargis/ and search for ‘Benld’, you can see a picture of it rotting away in the ‘70s.