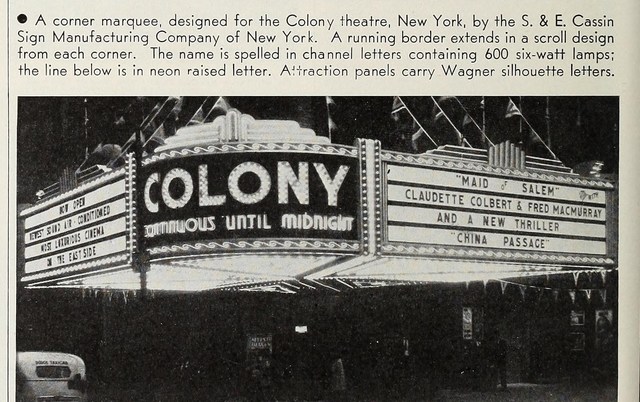 I believe that this theatre was later named the Colony, a Trans Lux theatre. It was extensively remodeled in 1959, and became Temple Sharaay Tefila.

Here is a link to a photo (the one in the center) of the 79th Street Theatre when is it was the Colony. Note the demolition of the 2nd Avenue El in progress.

Here is a recent photo of the former Colony Theatre, which is now Temple Sharaay Tefila. http://mysite.verizon.net/vze7r9g5/colonytheatre/

I was very pleased with valuable comments that followed my recent post on the Colony Theatre. I came into Manhattan last Saturday from my home in Queens primarily to snap the pictures of the former Colony and Europe theatres that I posted. I was born and raised in the Yorkville neighborhood where these theatres were located. Of the three theatres that were within two or three blocks from where I lived (on 78th St. near 1st Ave.), the Monroe, Europe, and Colony — I am old enough to remember only the Colony, which closed when I was about five years old. I particularly remember a red-haired women sitting in the ticket booth who smiled at me wheneverI passed with my parents.

It is not surprising that the German-language films played at one time at the Colony. 79th St. was the center of a large Hungarian population that had immigrated from Austria-Hungary and would have understood German. A few blocks north was a large German community. The Europe Theatre at one time showed German and Hungarian-language films, and on 86th Street, the Casino and 86th Street Garden Theatres often featured German films.

Yorkville is now a gentrified, yuppified neighborhood with few traces of its ethnic past.

Hey Lost your link for this site didn’t work. I went to the page and had to take off the following to get to the page

Still listed as a Trans-Lux theatre in the 1959 Film Daily Yearbook.

What happened to this theatre’s intro?