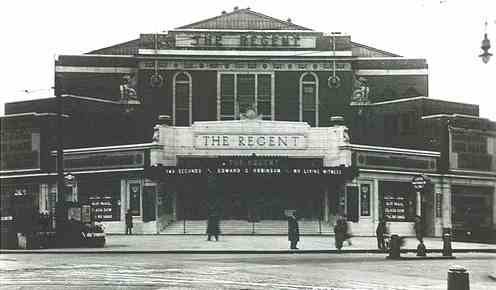 Located in the inner north London district of Stamford Hill at a site previously occupied by a residence named Lion House. One of several prestigious Regent Theatres that were built for the Provincial Cinematograph Theatres (PCT) circuit, in this case it was joint promotion of Gaumont British and PCT. It opened on 18th February 1929 with Janet Gaynor in “Street Angel”.

The architectural style could be described as early Art Deco style with a Classical Italian influence and architect W. Sydney Trent was given credit for the design, assisted by his father William E. Trent. Located on a prominent corner site at the busy intersection of Amhurst Park, Stamford Hill and Clapton Common Road, it was the largest cinema in the district. Flanking each side of the entrance was a block of residential flats named Regent Court, which were built soon after the Regent Theatre had opened. Harking back to the previous building on the site, the façade had a sculpture of a lion on each side above the entrance.

There was a spacious foyer which had a marble floor, the lower walls were in Italian Travertine and there was a coloured glass dome in the ceiling. Beautiful doors which were glazed and had etched Art Deco figures on them led through into the inner lounges in stalls and circle levels. The main feature of the auditorium was a huge 70ft diameter dome that had a delicate lattice pattern. The theatre had a fully equipped stage and dressing rooms and there was a Wurlitzer 2Manual/9Ranks theatre organ. There was also the additional facility of a café for the use of patron and non-patrons.

It was re-named Gaumont Theatre from 24th January 1960 and was re-named Odeon from 21st October 1962 to bring it into line with other Rank Organisation cinemas.

The Odeon closed on 16th September 1972 with the double bill programme Shirley MacLaine in “The Possession of Joel Delaney” and Mike Raven in “Crucible of Terror”.

The building was boarded up and lay unused until it was demolished in the Spring of 1984. A Safeway supermarket was built on the site, the two flanking blocks of flats from the original 1929 scheme were retained, one is named Regent Court. Safeway moved out in the mid-2000’s and it became a Somerfield supermarket, and in December 2010 a Sainsbury supermarket.

The two blocks of flats remain, but where the cinema was located is now a Safeway supermarket:
View link

Ken, I think this was eventually demolished much later. I worked in the area around 1982/3 and remember it being demolished and having to use the hideous Safeway. A sad loss.

porterfaulkner, many thanks for your correction. I have just looked….. and I wrote the date 1984 on the rear of my demolition photographs. The 1981 date I took from Allen Eyles excellent book ‘Gaumont British Theatres’ and I will amend the above opening introduction to this theatre.

I used to live across the road from the Regent, as it was in the 1930s. Sometimes, the staff would dress-up for certain films. The one I clearly remember is Flaherty’s Man of Aran, with the commissionaire in oilskins and sou'wester.