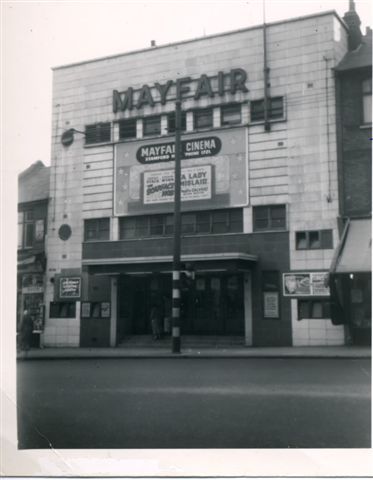 Located in the north London district of South Tottenham. Opened as the Central Hall Picture Palace on 28th July 1910 with a seating capacity of 323 (223 in the stalls and 100 in the circle). It was designed by architect Edward A. Stone of Norfolk & Pryor, for the Central Hall Circuit. In the late-1920’s some re-building was carried out. By 1937 it was listed as the Roxy Cinema with a seating capacity of 440. The operators were Wardcott Cinemas Ltd.

In 1938 it underwent a modernisation/rebuild to the plans of architect Colin R. Crickmay and the building was given a modern Art Deco style facade and interior. The auditorium now seated 500 in stalls and circle levels, and the cinema was operated by A. Goldstine. It re-opened with Jeanette MacDonald & Nelson Eddy in “Maytime” and “Kliou the Killer”.

The Mayfair Cinema closed on 28th January 1961 with Stanley Baker in “The Criminal” and Christian Marquand “Passionate Affair” (“Tendre et violente Elisabeth”). It was demolished and a church hall named Loyola Hall (used by the Catholic church opposite) was built on the site. Currently used by the Brazilian based United Church of the Kingdom of God(UCKG).

I remember the Mayfair very well, as it was opposite my old school, St. Ignatius College, Stamford Hill, Tottenham. While I was there the college / church purchased the buiding and replaced it with a bland meeting hall. As some of you may know, St.Ig’s most famous “old boy” was Alfred Hitchcock. The Central Hall dated from circa 1911, when Alfred Hitchcock would have been a pupil at the college. I can imagine him looking with anticipation at the stills outside the Central Hall, just as I did some fifty years later outside the Mayfair. Colin Crickmay was still alive in the 1970s and very kindly let me copy his photo of the old Central / Roxy. The Mayfair appears to have been a total rebuild.