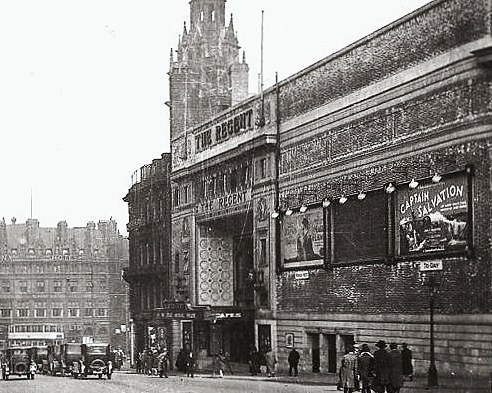 The Regent Theatre was built for the Provincial Cinematograph Theatres circuit (PCT) and was the first major cinema designed by architect William Edward Trent. It was located on Barker’s Pool, opposite City Hall.

It opened on 26th December 1927 and seating was provided for 1,450 in the stalls and 850 in the balcony. The Neo-Classical/Italian Renaissance style auditorium was very similar to a typical Thomas Lamb design in theatres in the USA. There was a double dome in the ceiling and the projection box was built into the dome. The cinema had full stage facilities, a Wurlitzer 2Manual/8Rank theatre organ was installed and a 150 seat café was an added amenity.

PCT were taken over by Gaumont British Theatres in February 1929 but it retained the name Regent until 27th July 1946 when it was re-named Gaumont Theatre. The stage was still being used in the 1960’s for one night concerts by artists such as; Cliff Richard, Eddie Cochran, Bobby Darin, Victor Borg, Nina & Frederick, The Rolling Stones, The Beatles and the Count Basie Orchestra.

In October 1968 it was closed for twinning. All vestiges of the original decoration was removed and the two curtain-walled auditoriums opened on 23rd July 1969 with seating for 737 in the former balcony and 1,150 in the former stalls. On 25th November 1979 a third screen was opened in the former café area which seated 144.

The Gaumont closed on 7th November 1985 with “Perfect”, Madonna in “Desperately Seeking Susan” and “A View to a Kill”.

The building was demolished and shops, offices and a twin replacement Odeon Cinema was built on the site. The entrance to the new Odeon was on Burgess Street, approximately where the stage of the Gaumont would have stood. The new twin Odeon opened in 1987 (seating 500 and 324) and closed in 1994; it is now a nightclub and has its own page on Cinema Treasures.

A close up photograph of the entrance of the Gaumont in Summer 1949:
View link

A view of the entire facade in January 1957:
View link

As a twin Gaumont Cinema in Summer 1971:
View link

A colour nightime shot as a twin Gaumont Cinema and some more details, historic photographs and a photograph of what His Royal Highness Prince Charles called ‘The Monsterous Carbuncle’ which was built on the site:
View link

Victor Borge was the last person to appear on the Gaumont stage in 1968 about a week before the theatre was torn apart (criminally!)
Other films shown in 70mm in Gaumont 1 on the Cinerama screen included re-runs of ‘Doctor Zhivago’, ‘Far From The Madding Crowd’, ‘Mayerling’, ‘Oliver’ and of course ‘The Sound Of Music’

In 1967, saw two live shows on the Gaumont stage – Tom Jones with Kathy Kirby as support and Engelbert Humperdinck with the Rockin' Berries as support. One year later and all that beautiful interior was demolished along with the Gaumont’s large stage.

When the Gaumont was twinned,the larger Gaumont 2 in the former stalls area was also equipped to show 70mm films and re-runs of ‘Ben Hur’, ‘Lawrence Of Arabia’ and ‘Oliver’ were shown in the 70mm format in this auditorium.

i well remember hello dolly being shown on the ,“cinerama,” screen , and very effective it was too

Hi Robbie, I have just seen your posting regarding Richard Isaac who was a friend of mine when we worked together in Leicester during the mid to late 1960’s. Perhaps you could email me . (Ian Drummond)

I was the House Manager at the Gaumont Sheffield in the mid 60’s under General Manager Harry Murray, a very strict man to say the least. Ha d the privilege to meet many of the “stars” of that era during the one night live shows staged there.