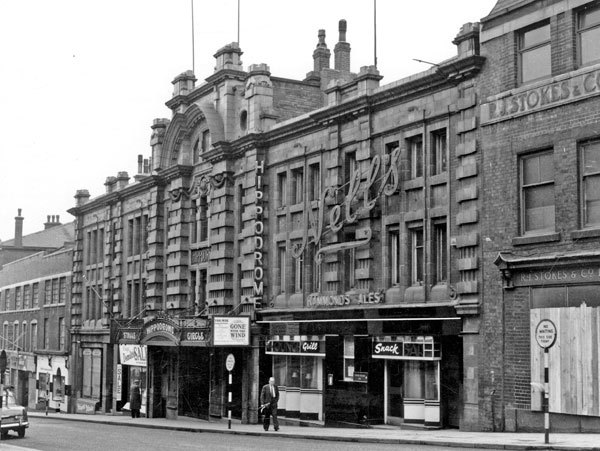 Opened on 23rd December 1907 as Barrasford’s Hippodrome presenting music hall acts and films projected from the Barrascope. It was soon renamed Hippodrome Theatre of Varieties and was Sheffield’s largest theatre. It stood in Cambridge Street just up the road from the Moss Empire chain’s Empire Theatre, which it was built to rival. Seating capacity was 2,730 plus standing spaces for many more and had it Sheffield’s largest stage. It was under the control of Thomas Barrasford’s Vaudeville Circuit and attracted the big Music Hall stars of the day.

The façade was in terra cotta, with granite pillars and marble enrichments. Over the central portico was the name of the theatre in stone, surrounded by designs symbolic of art, music and drama. The auditorium was made up of stalls, circle and gallery, the cantilever circle having the longest girder ever used in a theatre. There were also four boxes on either side of the proscenium arch.

In 1931, the Hippodrome Theatre suddenly closed as a live theatre, and was leased to the Associated British Cinemas(ABC) circuit, who built a new projection suite at the rear of the circle and installed two Ross projectors. The theatre was redecorated and the seating capacity was reduced to 2,445, re-opening as the Hippodrome Cinema on 20th June 1931. An unusual feature of the auditorium was its sliding roof, which could be opened to provide ventilation during hot weather.

The Hippodrome Cinema was closed for three weeks in 1938 for redecoration and improvements to be carried out. The theatre suffered bomb damage on 12th December 1940 but was soon re-opened on 1st January 1941. It still had the occasional stage show but films were the main bill of fare. ABC’s lease expired in 1948 and while they hesitated in renewing it, the lease was taken over by The Tivoli (Sheffield) Ltd. company, as their own cinema, The Tivoli in Norfolk Street, was closed due to bombing. They refurbished the cinema and reopened on 26th July 1948.

CinemaScope was installed in May 1954 and the Hippodrome Cinema was the first in Sheffield to show films in 3D, such as “"House of Wax”, “Hondo” and “Kiss Me Kate”. It was also one of the first Sheffield cinemas to open on a Sunday with a separate programme to the weekdays programme. Seating was now provided for 913 in the stalls and 506 in the dress circle, the gallery was closed in 1959. In 1954 it was announced that the Hippodrome Cinema and surrounding property was to be compulsory purchased by Sheffield City Council and demolished. However, the Hippodrome Cinema remained open for a further eight years, finally closing on Saturday 2nd March 1963 with a film it had shown on four previous occasions -“Gone With The Wind”. The Hippodrome Cinema was demolished later in 1963, and the new Grosvenor House Hotel and retail outlets were built on the site.

Three cinemas, known as Cineplex opened in some of the shop units but these are now closed and the whole building again is earmarked for demolition.