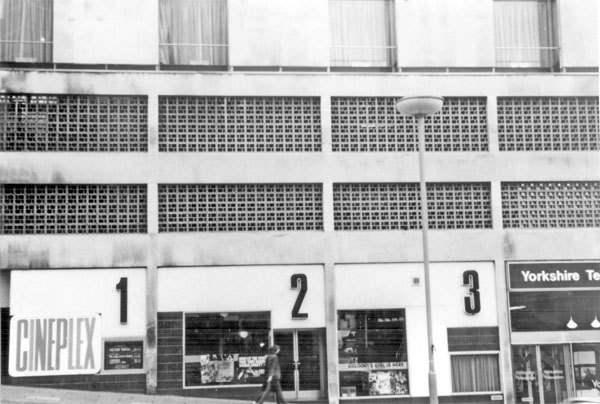 The Anvil Civic Cinemas in Sheffield opened as the Cineplex Three Screen Cinema on 31st January 1972. It was opened and managed by David Williams who was a retired Rank Organisation official. It occupied three shop units within the Grosvenor House Hotel complex on Charter Square, which was built on the site occupied by the Sheffield Hippodrome Theatre (which has its own Cinema Treasures page).

Cinema 1 seated 65, Cinema 2 had 76 seats and Cinema 3 a capacity of 110. Initially all three screens were fitted with 16mm projection facilities which did restrict the number of newer films they could show at the complex. After 11 years, David Williams decided to end his association with the complex and the cinemas closed.

In early-1983 the cinemas were taken over by the Sheffield City Council to be run as a municipal arts cinema. Since 9th October 1967, in association with the British Film Institute, the City Council had run the Sheffield Film Theatre, hiring the Sheffield Library Theatre (which has its own page on Cinema Treasures), next door to the Lyceum Theatre, once a month for a film week. With the closure of the Cineplex they decided to move the operation to the Charter Square site and reopened the three cinemas on 31st March 1983 renaming them the Anvil Civic Cinemas from 6th October 1983.

From the outset the operation was the subject of much criticism from opposition groups but the cinemas managed to develop a programming policy catering for all tastes. In 1985 the 3rd screen was closed for three months for 35mm projection to be installed and other improvements were carried out, including better sound proofing between the three screens.

From its initial opening in 1972 there was also a licensed bar on the first floor. On 3rd November 1990, faced with ever mounting financial pressures, the Council closed the three screen complex for good.