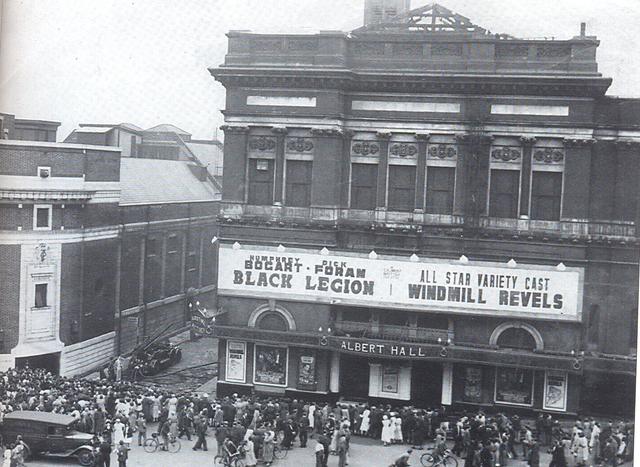 The Albert Hall stood in Barker’s Pool on the corner of Burgess Street, Sheffield. It was built on the site of the former Quaglen’s Circus. Built to the designs of architects Flockton & Abbott, it opened as a concert hall on 15th December 1873.

The main auditorium was on the first floor with a smaller hall, chapel and dressing rooms on the ground floor. The main hall was made up of salon (stalls), a balcony of three sides on the first floor with a second tiered balcony and upper gallery above. The decorations were opulent with walls and ceiling adorned with fine panels and rich tracery carvings of famous composers and intricate designs of cornucopia and Doric columns. At the rear of the open stage was a fine organ built in Paris by Cavaille-Col. Flanking the organ on each side was a curved box, arched and suitably draped.

Animated pictures were first shown here in September 1896 and over the next few years many showmen visited the Albert Hall with programmes of short films. In December 1912 the Albert Hall was leased for a year to the Leeds firm Northern British Animated Pictures but could not have been too successful for them, as they did not renew the lease. Films were shown here on a more regular basis during the First World War and D. W. Griffith’s “Intolerance” received its Sheffield premier here on 3rd December 1917.

New Century Pictures leased the Albert Hall in 1918, purchasing it in 1919 and over a period of sixteen months, without closing, converted the building into a full time cinema. A proscenium arch was constructed to narrow down the wide stage opening and the screen and tabs were fitted in front of the organ. A new projection box and new projectors were also installed. New Century Pictures became part of the Gaumont British Picture Corporation and in June 1927 they closed the Hall for six weeks for complete refurnishing and redecoration, by architects Chadwick & Watson. A new canopy was built over the entire façade outside and down the side of the building. Seating was reduced from around 1,900 to 1,611 at this time and the proscenium was 38 feet wide. It re-opened on 25th July 1927 and the first sound film was Richard Barthelmess in “Weary River” using the Western Electric Sound system. From 1927, its next door neighbour was Provincial Cinematograph Theatres(P.C.T) magnificent Regent Theatre (later named Gaumont), and the Albert Hall suffered somewhat due to the success of this fine cinema.

During the night of 14th July 1937, following a showing of Humphrey Bogart in “Black Legion”, a disastrous fire gutted the building and the burnt out remains were left standing for a few years. A new Gaumont cinema to the designs of architect W.E. Trent was planned, but never materialised. During the 1930’s when the new City Hall was being built across the road, it was proposed to remove the Albert Hall’s organ and place it in the new City Hall, but this never happened and the organ was lost in the fire. After World War II the land was bought by Sheffield Corporation as the site for the new law courts but these were never built here and in 1963 Cole Brothers Department store (a subsidiary of the John Lewis Partnership) was built on the Albert Hall site. This too is now earmarked for demolition when a new store for them is built on the new redevelopment of the old Hippodrome Theatre site.