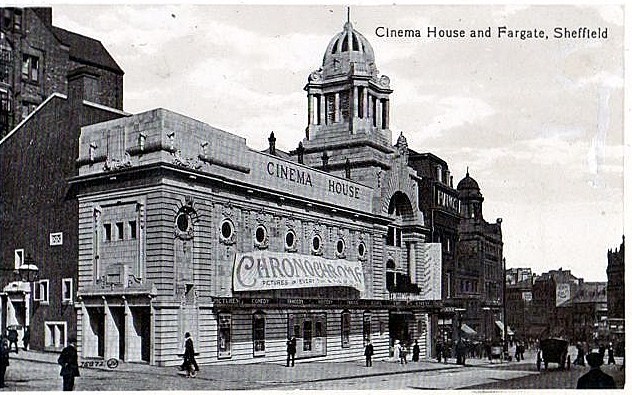 The Cinema House was opened on 6th May 1913. It provided Sheffield with a new landmark, a glazed white faience tower above the cinema entrance, with the rest of the façade given the same treatment. Designed by Walsall based architects, J.H. Hickton and Harry E. Farmer, in a Classical style and built by George Longden & Son Ltd. of Sheffield.

Passing through the entrance vestibule where the pay boxes were, you entered into a hall designed in Jacobean style which was a waiting area with settees and chairs. A grand double staircase in white and green marble led up to the first floor lounge area which was decorated in shades of blue and pink with tapestries on the wall. This also served as a tea room. The auditorium, which was entered at the screen end, seated 800 and continued the Jacobean theme. Walls were panelled in oak and huge hunting scene tapestry panels hung from the ceiling. The balcony fronts and ceiling were in embossed fibrous plaster and above the proscenium arch was a mural depicting an Elizabethan seascape. Dark blue drapes covered the screen with blue seating and carpets. The projection box was located beneath the balcony. A twelve piece orchestra played during the silent film era, then sound was installed in February 1930, one of the last Sheffield cinemas to show ‘talkies’.

The Cinema House narrowly escaped damage in 1940 when a bomb exploded further up Barkers Pool (doing damage to the outer walls of the Regent/Gaumont which stood virtually across the road by this time).

In 1959 the cinema owners sold the building in a property deal with the final show on 12th August 1961 with John Wayne in “The Horse Soldiers” and Burt Lancaster in “The Devil’s Disciple”. The Cinema House was then demolished later in the year with a new development of offices and shops rising up on the site.

Another early postcard view of the Cinema House, when Barkers Pool was named Fargate:
http://flickr.com/photos/kevp/1968587356/