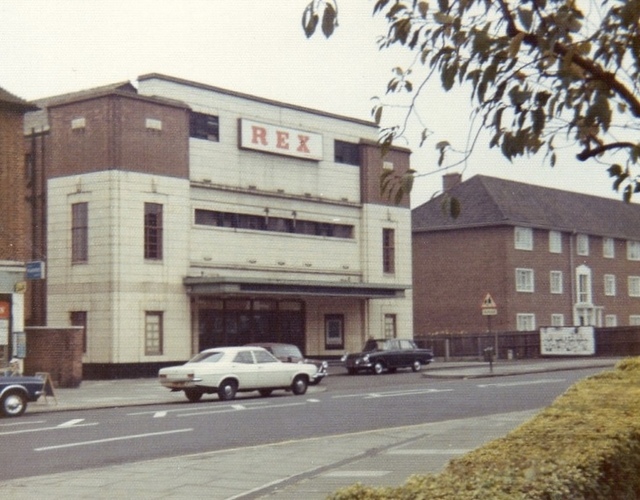 This was built for Oscar Deutsch’s Odeon Theatres Ltd. chain and was designed by architect A. Douglas Clare. Clare died in July 1936 as the building was near completion and it never made its proposed opening date of September 1936 although almost everything was ready, even the name Odeon was fixed to the building. Architect Andrew Mather took charge of the project.

In mid-November 1936 the building was sold to the small independent Shipman & King circuit and they opened it as the Rex Cinema on 28th December 1936 with Ralph Lynn in “All In” and Frances Farmer in “Border Flight”. The Rex sign was mounted over the Odeon name sign on the facade of the building.

Seating inside the auditorium was in stalls and balcony levels. The decorative scheme was in an Art Deco style with a deeply banded central plaster cove fixture in the main ceiling.

The Rex Cinema played concurrent to either the Astoria Cinema or Rivoli Cinema in nearby Ruislip, which were both operated by Shipman & King.

It led an un-eventful life and was closed on 22nd September 1973 with Roger Moore in “Live and Let Die”. The cinema was demolished and a Somerfield supermarket was built on the site. This has since been demolished and a block of flats with shops stand on the site in 2018.