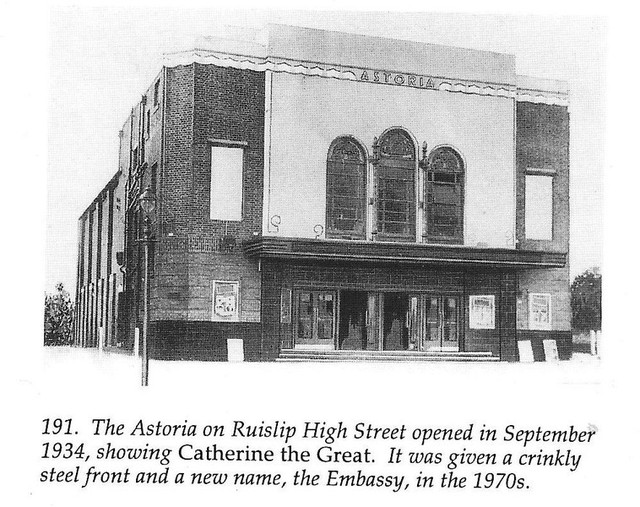 The Astoria Cinema was the second cinema to be opened in Ruislip, an area in the north-west of todays' Greater London. It opened on 24th September 1934 with Elisabeth Bergner and Douglas Fairbanks Jr. in “Catherine the Great”(The Rise of Catherine the Great). It was operated by the Charles F. Cheshire group. Like the nearby Rivoli Cinema, it was taken over by the Shipman & King circuit in 1935. The Astoria Cinema had a 38 feet wide proscenium which had attractive grilles depicting fishes swimming, on each side on the splay walls.

The Astoria Cinema was ‘modernised’ in 1967 and had a metal cladding mounted on its facade. It was re-named Embassy Cinema from 30th April 1967.

Shipman & King were taken over by the Grade Brothers EMI Group in 1967. The Embassy Cinema was closed on 28th November 1981 with Dudley Moore in "10" and Goldie Hawn "Private Benjamin". It was demolished in October 1986. Today, the new building on the site contains a MacDonalds Restaurant and an Iceland supermarket.

A set of vintage photographs of the Embassy Cinema here:
View link