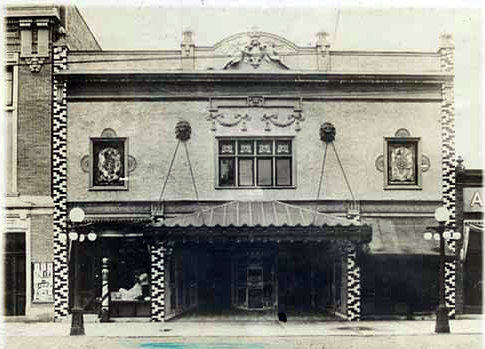 The A-Muse-U Theatre was opened on September 2, 1912 with 1,005 seats. It was renamed Rialto Theatre in 1922. Seating was listed as 791. The Rialto Theatre was the second largest theatre in Clinton. In 1961 the theatre operations was taken over by Central State Theatres and renamed the Cinema I in 1965. The theatre closed around 1999 and has since been demolished. The Cinema I was located next door to the Capri III.

The Cinema One was still open for business as late as 1999, which is when I saw “Deep Blue Sea” there. At this time, there had been a hole knocked in the wall separating the lobbies of the Capri and Cinema One theaters; it appeared the area was under construction, but I never attended another movie at either theater before they were shut down.

This history of Clinton’s theaters from the Centennial Edition of the Clinton Herald, June 18, 1955, says that this house opened in 1908 as the A-Muse-U Theatre and was renamed the Rialto in 1922. The Rialto was remodeled and renamed Cinema I in 1965.

The Facebook page Clinton Movie Theatres has several photos of and advertisements for the Rialto/Cinema I, and a 1986 ad for the Cinema I Video Movie Mart, so the theater housed a video rental store for a time.

This article from the November 30, 2003, issue of the Quad City Times tells of the sale of the Cinema I and Capri III buildings and the plans to have them demolished the following spring.

The 1955 article I cited in my previous comment might have gotten the opening year of the A-Muse-U Theatre wrong (and perhaps the form of its name as well.) The July 6, 1912, issue of The Moving Picture World had a brief article about Clinton’s movie theaters, listing them as the Colonial, Airdome, Lyric, Casino, Bright Spot, and Superba.

A Mr. Henle, the article said, “…will soon begin the building of an attractive and cozy moving picture theater on Sixth Avenue….” and this house was to be called the Amuse-U Theatre. Another theater, which was not yet named but would open as the Royal, was already under construction. The Amuse-U (or A-Muse-U) probably opened by the end of 1912, not in 1908.

A vaudeville house called the Family Theatre had recently been operated as a movie house as well, the article said. It didn’t mention the Clinton Theatre, a large legitimate house that had opened around 1897 as the Economic Theatre. I’ve been unable to discover if the Clinton Theatre ever ran movies, but it was apparently still in operation at least as late as 1930.

The July 20, 1912, issue of The Moving Picture World had another item about the A-Muse-U Theatre:

“The Amuse-U, the new Henle photoplay house at Clinton, Iowa, is to have one of the largest mirror screens made, two pianos and a Victor autophone, an indirect lighting system and comfortable seats for 1,005 persons.”

The house was mentioned yet again in the August 12 issue:

“Menaced by a decaying elm tree in front of his A-Muse-U, now in course of construction, L. M. Henle went before the city council of Clinton. Iowa, and won consent for its removal by promising to substitute a bubbling fountain.”

a later issue of the magazine said that before installing the picture machine in the A-Muse-U, Mr. Henle put it on display in a local store window for a time. Finally, the September 28 issue of TMPW carried this announcement of the opening of the house:

“E. M. Henle opened his new "A-Muse-U” theater on Sixth Avenue, at Clinton, Iowa. September 2. The house has a seating capacity of 1,000, an indirect lighting system, fireproof operating room, and is well ventilated. The walls of the auditorium are in red and green, with handsome salmon panels. The ceiling is paneled in cream and salmon.“

As the magazine used the form A-Muse-U for the theater’s name in three consecutive items, that must have been correct.