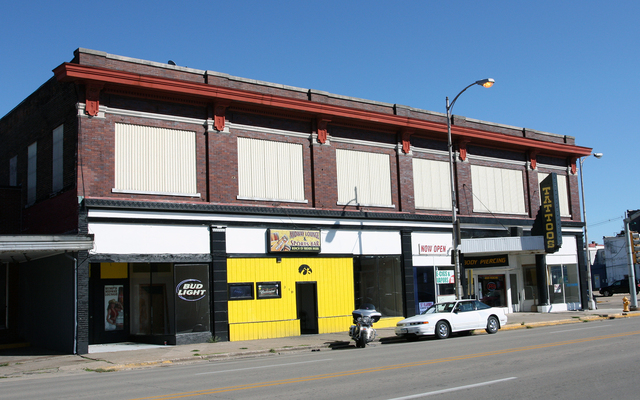 Originally opened as the Royal Theatre, by 1941, the Strand Theatre was operated by A.H. Blank, a subsidiary of Paramount Pictures Inc.

Today it is the England Recording Studio.

According to this webpage, this theater originally opened as the Royal.

It was a dry cleaners before it became a studio. My Mom told me that I met Rex Allen there when I was 3 years old. I did not remember it until she told me years later.

The July 6, 1912, issue of The Moving Picture World had this item about the house that became the Royal Theatre:

“DR. LANGAN, a local capitalist, is erecting an up-to-date office building at the corner of Second Street and Fourth Avenue. The lower floor will be used for a moving picture theater. The lessee has not announced himself to date.”A later paragraph in the same item listed the movie theaters then in operation at Clinton. They were the Colonial, Airdome, Lyric, Casino, Bright Spot, and Superba. Another theater besides the Royal was about to begin construction, and was to be called the Amuse-U.

The Royal Theatre might have opened before the end of 1912, but the earliest mention of it by name I’ve found in TMPW is from November 15, 1913. The Royal was renamed the Strand in 1916, according to the web page that CSWalczak linked to earlier.

The theater is in need of help can anyone recommend any sites?

Currently it is being called The Strand again. It recently had a tavern, eCigarette store, Tattoo Shop, and Prepper/Military Surplus store.

The original balcony is intact.

Its claim to fame is that originally it was the oldest open air theater west of the Mississippi River.

In the past it was a music store, grocery store, and apothecary.

Lillian Russell, Al Jolson, and the Barrymore’s played there according to unconfirmed information.

“In the early 1900’s Dixon and Stewart opened it as an open air shophouse and played stock shows at prices from 10 to 30 cents in their Airdrome. Later the Langan building was built here and the theater was called The Royal (owner JC Langan). In 1916 it was bought and renamed The Strand by a Mr. Alleman. He also owned the Princess and A-Muse-U.” Other owners include the Benders, England family, and Humphry’s.