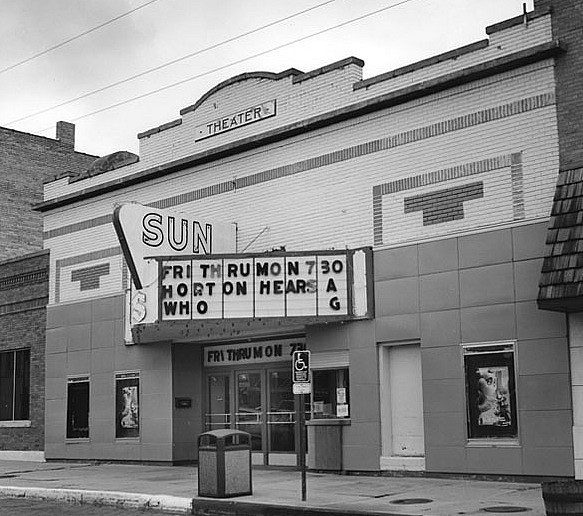 The Sun Theatre is a single screen small town theatre which originally had a seating capacity of 638. It was opened in 1927, and was built on the site of the Crescent Theatre which was destroyed by fire in 1924. In recent years has been beautifully restored.

It is currently listed as seating 275. It serves a county of 5,700 showing first run attractions. It is also listed as a State Historic Site.

Here’s a 2008 view of the SUN: http://www.boxsetgallery.com/stein/index4.html

An article called Movie Theaters of Holdrege, by Patti Simpson (PDF here) says that the Sun Theatre opened in 1927 on the site of an earlier theater called the Crescent. The earlier history of the Crescent is a bit muddled, as there was a house of that name in operation by 1910, and probably in 1908, and it was at the Sun Theatre’s address. Simpson says that the Crescent Theatre was destroyed by a fire in 1924, and the Sun opened three years later at the same location. Old photos show that the front wall of both theaters was the same, so it’s possible that the Crescent was only gutted, though it might have lost its roof as well.

The building was either built, or perhaps merely enlarged, in 1915, when this item appeared in the December 4 issue of The Moving Picture World:“HOLDRIDGE [sic], NEB. — The Crescent is the name of a new moving picture theater opened here by L. C. Severns. It has seating capacity for 600 persons.”Simpson’s article says that an L. C. Severns bought the Crescent and another house called the Empress in 1914. It also cites a 1911 newspaper article saying that an A. J. Severn of Lincoln, Nebraska, had bought the Crescent early that year. The 1911 article might have simply gotten the newcomer’s name wrong.

The article mentions some other theaters in Holdrege, but doesn’t say if any were operating during the period between the burning of the Crescent and the opening of the Star, but there must have been at least one as Holdrege had a population of about 3,000 and was unlikely to have gone without a theater for so long. A house called the Majestic Theatre, later renamed the Magic Theatre, operated from 1927 until 1937. An earlier house Called the Empress opened in late 1912 or early 1913, and a house called the Sterling opened in 1908, but no closing dates are given for either. There were also two early houses called the Gay and the Edison, both apparently short-lived nickelodeons.

The article does not mention a theater called the Auditorium, which might have been a public facility but which hosted at least one movie, an event which was reported in the March 18, 1921, issue of The Film Daily. The Auditorium seated about 2,500, and almost the entire population of the town showed up for the single showing of the Cecil B. DeMille-Jesse Lasky production Something to Think About.

As for the Sun, it was taken over by Central States Theatres of Des Moines in 1937, along with the Magic Theatre, which the company closed. The Sun was operated by Central States until 1968, and then again briefly in 1970 until going independent again in July of that year. From 1971 until 2008, the house was operated by members of the Braner family. In December, 2008, the Sun was bought by the current owners, Strategic Community Investments Group LLC, who upgraded the house. SCIG is primarily a national residential real estate investment firm, so I doubt they operate the theater directly.

According to the renovation video on the website, the new seats and screen came from the closed Cinema Center in Omaha.