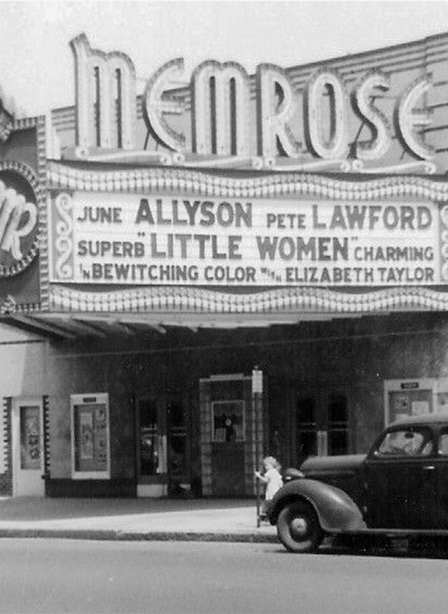 The Memrose Theatre was on Colley Avenue somewhere between Redgate Avenue and and Raleigh Avenue in the Ghent section of town. I think it was torn down when Colley Avenue was widened to a four lane divided road in this area. If I remember right it played mostly Walt Disney films. I think “Mary Poppins” played here for a long time, before anywhere else in Norfolk/Portsmouth.

LEVINE THEATRICAL ENTERPRISES, a very classy act, was the chain for this theatre.

That must be Sentara Norfolk General Hospital, that would put tne Memrose more or less between Raleigh Avenue and Fairfax Avenue on Colley Avenue. Alas, in those days, I think Colley Avenue was straight. I think, when it was widened a big curve was put in it, so I think the old Colley Avenue is now called Childrens Lane? Anyone else know anything about this or the Memrose? From what I can remember, I would guess it was BUILT in the 1930’s and was sorta ART DECO.

Chuck, thanks for finding the address.

wsasser, thanks so much for the photo!

I also remember The Memrose only showing Disney Movies. Bambi broke my heart. If I remember correctly there was a drugstore across the street (Colley Ave) and you could see Norfolk General Hospital. Was there also a ‘Highs’?

I grew up right down the street from the Memrose, on Raleigh Avenue. I think that’s where my Mom took me to “see” my first movie — Captain From Castile — when I was six months old. When I was old enough to go on my own, my mother would give me 50 cents — which was enough to pay for the ticket, a box of popcorn and a soda. Those were the days!

The Melrose was located on Colley Avenue, in the middle of the block between Raleigh and Red Gate Avenue.

Ah, i have happy memories of getting tossed out of the Memrose by an usher back in the late 60s … my mom took me to my first movie (I think it was Snow White) here and i recall i was a vocal little embryonic film critic at the tender age of 3 :) . Even 49 years later i can still see in my mind’s eye his smart uniform and his flashlight.

Years later in a suburban multiplex no longer extant, across the river (which happily is still extant), i repeated the experiment with my two young daughters. This time it was the Little Mermaid. After 10 minutes, my younger daughter kept saying “I wanna get outta here!” so we did. Of course by then in the early 90s ushers were something you’d only see at a funeral anymore. Does anybody even know how to ush anymore?

Now my daughter who wanted to “get outta here” is a new mom herself. I can’t wait for my grandchild to become a toddler so I can keep up the family tradition and go disrupt some 21st century flick in a couple years. Of course with the mobile phone use and our greatly coarsened culture of today probably no one will even be able to hear her :(