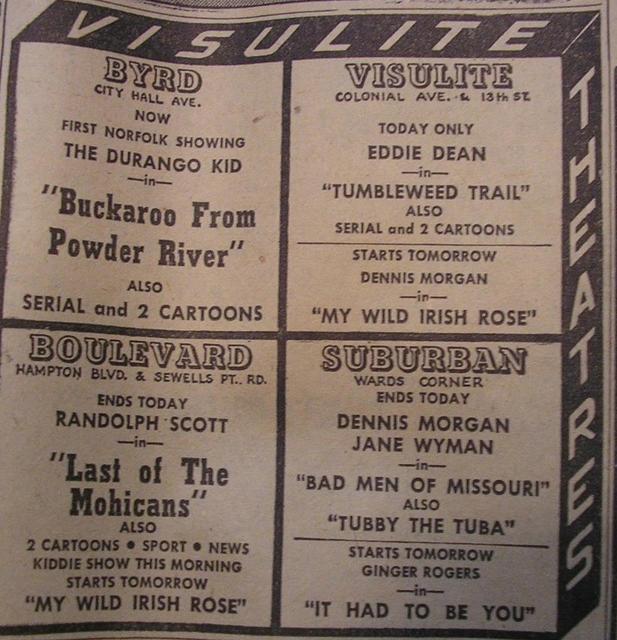 The Visulite Theatre was opened prior to 1939, and continued into the mid-1950’s. It was a popular theatre which screened many ‘B’ western movies.

Later renamed Towne Guild Theatre it went over to more mature fare. Operated by Levine Theatrical Enterprises of Norfolk, headed by Robert Levine. It closed around 1964.

This theatre was open as early as 1939, because the Visulite is where “The Wizard of Oz” premiered in Norfolk. (I read that in an old newspaper ad on microfilm.)

As published on April 8 1937 in the Norfolk Ledger Dispatch

All photos by Vollmer.

The Visulite, the last word in theatre construction recently opened at the corner of Colonial avenue and Thirteenth Street under the direction of Jeff Hofheimer with Robert Coupland as house manager. The equipment of the Visulite includes the latest developments of the motion picture industry –.

I got this from a movie expert friend of mine who lived and still lives in the area and attended the Visulite growing up:

VISULITE THEATER On April 1, 1937, the Visulite opened its doors. The feature film was THE GUARDSMAN with Alfred Lunt and Lynn Fontaine. The Visulite was a revival theater showing first class pictures, using the trans-lux rear projection system. By the 1940s, the Visulite became another neighbor theater showing pictures that had first been screened at the first run theaters. It was usual for the Visulite to show as many as 4 or 5 pictures each week. On September 21, 1946, the decision was made to devote the Saturday program to a western feature and a serial chapter. The first western was DON’T FENCE ME IN with Roy Rogers. The first serial was THE SCARLET HORSEMAN. From the noon opening to dinnertime, kids were the audience. After dinner, the seats were filled with predominately adult patrons. From time to time, a non-western picture would be shown on Saturday, usually a jungle adventure with Johnny Weissmuller. The last Saturday western and serial program was shown on Saturday March 29, 1952 with CYCLONE FURY with Charles Starrett and Chapter 7 of CAPTAIN VIDEO. On the following Sunday, TOO YOUNG TO KISS with Van Johnson was the last film shown at the Visulite. Patrons never found how Captain Video and Ranger escaped the cliffhanger ending. The Visulite had a fifteen year run. The Visulite later reopened as the Towne Theater as part of the Memrose chain, showing such fare as AND GOD CREATED WOMEN with Brigette Bardot and MASH with Donald Sutherland. In addition, there was a Saturday kiddie show with a family oriented feature and a chapter from a Columbia serial until the early 1960s. In the early 1970s, now called The Towne Art, an independent theater, a change was made to X rated adult fare. The theater finally closed its doors in the mid 1970s.