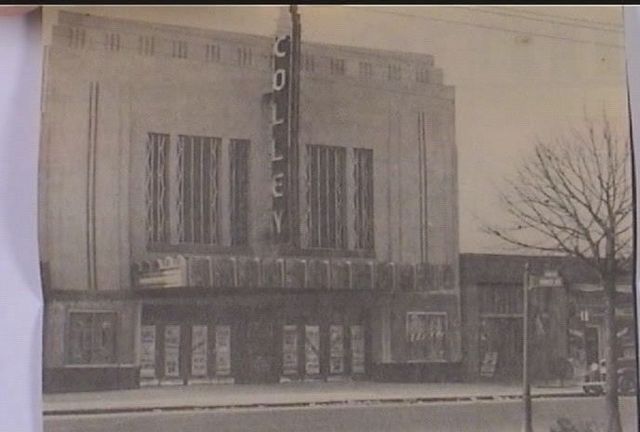 The Naro Theatre, in the Ghent section of downtown Norfolk, opened in the 1930’s as the Colley Theatre.

Reopened in the early-1970’s as an art house and revival theater, the Naro Theatre has enjoyed success over the years, catering to a loyal audience interested in independent, foreign and limited release features.

Maybe they expaned the concession stand.

Or, perhaps, the “facilities”

As they said on re-opening night in 1977-8, the “Expanded Naro was for those who refused to be "Naro-minded” and wanted good, quality, independent cinema! (I was there in the audience that night…I believe it was a double feature of Mr. Smith Goes to Washington and Mr. Deeds goes to Town…or was that another night…anyway, good to see that there are many “NARO-minded” folks still left in Norfolk to keep this theater from the wrecking ball!

This photo of the Colley Theatre is dated 1936. Aside from the loss of the vertical sign and the original marquee, and the removal a bit of the nice Art Deco detailing on the ground floor, the facade of this theater is remarkably well preserved.

Now that the Naro is completely digital I have technical question about their old days. I know during the 70’s and 80’s they had 70mm capacity. But back when the theatre was still called the Colley, did they also have 70mm? I ask since I know the Norfolk premiere showings of both CLEOPATRA and PATTON played there. I know other road show pictures played there in the 60’s as well. Can anyone shed some light on this? Thanks.

I lived in Norfolk during the 1950s. I lived on Baldwin Ave. around the corner from the Colley Theater. Does any remember whether it had a balcony or not. Please let me know. I spent many Saturday matinees in this theater.

sliwi, yes it does have a balcony. It’s usually not open these days however. I’m not too sure why.

What company or chain ran the Naro in the early 1980s?