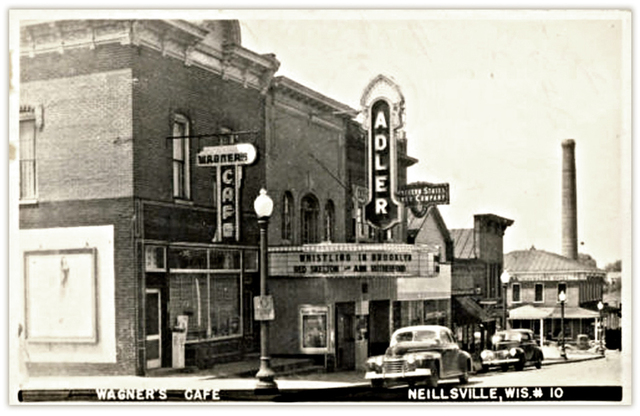 Trags Theater was opened at 150 S. Hewett Street (today renumbered 608) on November 10, 1921 with Mary Pickford in “Though the Back Door”. It was designed by architectural firm Balch & Lippert of Madison, WI. In 1929 it was taken over by J.P. Adler of the Adler Theater Co. and was renamed Adler Theater.

This May 1950 article in the Clark County Press mentions that William Tragdorf opened the Adler in the early twenties:

Ole Botnen was a familiar figure to all in the area who have, at one time or another, called for help with pipes, valves, traps and gadgets. He began in the plumbing trade back in 1910, when he started working in Neillsvilleâ€™s only plumbing shop, operated by Tom Hommel. The shop then was located in the basement of the old Opera House, better known to present-day Neillsville-ites as the Armory.

Then years later, in 1920, Ole started working for P. M. Warlum and for the last 30 years he has been associated with this organization and its successor, Warlum-Robinson, Inc. At that time, the Warlum shop was located in what now is the annex of the Adler Theater, which houses the Neillsville Beauty Salon on Sixth Street. After a year or two, the property was purchased by the late William Tragsdorf, who established the theater. The Warlum shop and Ole Botnen with it, moved into the basement of the building, which is now the Model Laundry. At that time, it housed the Badger Theater. The stay there was not long and the Warlum concern transferred its base of operations to the building now occupied by the Moldenhauer Jewelry store.

The Adler theatre was a huge part of my childhood. I was a big city girl living in Chicago, but every year my family would visit my grandfather and his realitives living in Neillsville at least twice a year. If you have ever visited Neilsville in the 60,s and 70,s there was not a lot of activities but we created our own and they are some of the best memories of my childhood. The Adler theatre’s price was 35 cents for admission. Even in chicago we were charging $2.00. this was incredible for a young child and young teen. We went to the movies every night. We memorized the lines in the movies and could quote them at great length. Some of my favorites were the Impossible Years with David Niven. It was so timely, and the best was Funny Girl with Barbara Streisand. Wish I could see these movies again at the Adler.

On November 10, 1921, Trags Theater, Neillsville’s new $35,000 motion picture house, opened at 7:30 p.m. with Mary Pickford in “Through the Back Door,” the next-to-last Pickford release, with four showings on Thursday, Friday and Saturday nights and a Sunday afternoon matinee at 2:30.

Trags Theater was the culmination of months of planning on the part of a Neilsville resident William E. Tragsdorf. The theatre was 30 feet wide and 126 feet deep, with an arcade on Sixth Street. The main entrance was on Hewett Street and the front of the house is two stories and of red ornamental brick. The show house is absolutely fire proof throughout, the floor being of concrete and the projection room, well lined. The lobby was on Hewett Street with a glass enamel box office, French doors in front and two large gilt poster frames. Delays made it impossible to complete the lobby by the opening show. Patrons exited the theater through the arcade, which was later fitted with a confectionery and cigar store.

The seating capacity was 402 seats on the main floor and two loggias with ten wicker chairs in each reserved for box parties. Restrooms and the theatre office were on the second floor. The ceiling of the auditorium was thirty feet in height. There were six ornamental lights on each side wall and four indirect lighting bowls in the ceiling. Two Torrid Zone furnaces and ten large fans were installed.

The main floor of the house will seat 402 persons. The concrete floor slopes to the front and is easily cleaned from back to the front.

There were two Simplex motor-driven projectors with music by an American Fotoplayer piano with pipe organ effects. The stage was large enough for vaudeville with a dressing room at one side. The scenery was painted by Universal Scenic of St. Paul and the drop curtain had a scene of the bridge from Old Panama, painted from a photo by Will Tragsdorf while he was located in Panama.

All the construction work was by local workmen including the architects, Balch & Lippert of Madison. The masonry was by Van Wagner, Owens & Van Wagner, the heating and ventilating by P. M. Warlum, the decorating by Jack Schueing, the carpeting by Otto Roessler.

Originally, the theater lot had been the site for a hardware business which started in 1879, owned by Denis Tourigny who, after 40 years in business, sold out in 1919. Tragsdorf owned and managed the theater atb the beginning, then Darrell Gotschlin managed it until resigning in 1934. Wilmer G. Meier then came from Waupaca to accept the managerial position and remained until the theater’s closing. .