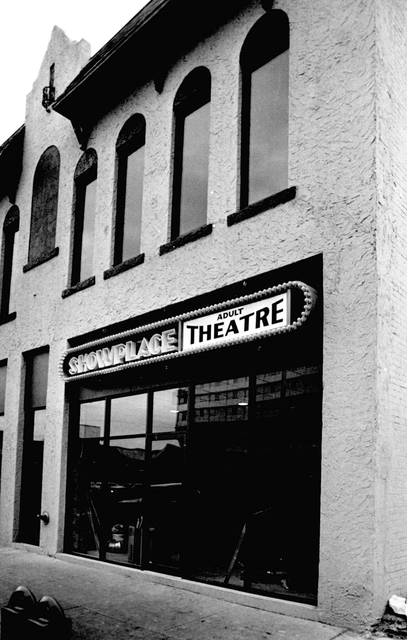 On the free search feature of the below listed link can be seen a November 28, 1980 photograph of Showplace Adult Theatre, from the Daily Oklahoman Newspaper Archives.

When the half dozen downtown adult theatres were razed one by one due to Urban Renewal, the off the beaten track Showplace X Cinema was spared, and became headquarters to husky male prostitutes who worked back rows. Trix were not actually performed inside the dark auditorium, but a price would be agreed on for commercial sex before the hustler would leave with his John.
Hustlers were safer here than on street corners, plus cheap walk-up hotels, (the towns oldest gay club) The burgundy Bar, and the bus station were only one block down.
Oklahoma City used to have a large share of transient male hookers because two major interstate hiways cross each other right downtown; North/South I-35 from Minneapolis to Houston, and East/West I-40 from the East Coast to Los Angeles.
These working boys only hung for a few days before moving on, and until the early-90’s law enforcement generally overlooked male prostitutes. Eventually strict crackdowns began on all prostitution due to increased violence (even some murders) against the Johns. Around that same time The Burgundy lost its liquor license, sleazy downtown hotels were condemned, the Showplace was forced to close, and the bus station increased security patrol.
These days the boys no longer bother to stop in OKC.