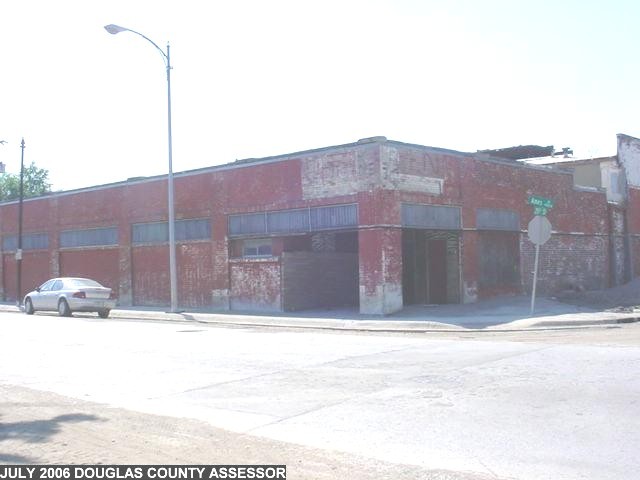 The North Star was remodeled in 1946. This Boxoffice article from April 27, 1946, reports on the remodeling of the old theater, then operated by W.H. Creal. The article includes a couple of photos. Plans for the remodeling were by architect H.A. Raapke, who also designed the New Moon Theatre at Neligh, Nebraska.

The building must have dated from the late 1910s or from 1920, the year the organ was installed in the Ames Theatre according to Lost Memory’s comment above. The upper portion of the facade of the narrow entrance of the L-shaped house looked much like the buildings in the neighborhood that survive today, most of which are built of a dark, reddish-brown brick.

I’ve been looking at the bird’s eye view of the block at Bing Maps, and I think it’s likely that the theater building still exists, but has been extensively remodeled. From the photo in Boxoffice it looks like the theater entrance was next to the alley running between 24th and 25th streets. The building now on this lot has a bricked-up area at that spot which has the same proportions of the theater’s entrance in the Boxoffice article’s photo. The way the roof line is finished also looks as though a parapet has been removed.

In Google’s street view, the brick wall along the alley looks considerably older than the walls on the street sides. Perhaps the street walls of the theater building were refaced when the theater was converted to some other use, and that’s why the building looks newer than its neighbors.

It’s also almost certain that the auditorium of the theater was actually in a building that is behind the structure that held the entrance. Boxoffice says that “…the lobby was long; but boxlike and unattractive.” It goes on to describe a standee foyer beyond the lobby. As the street front building is probably no more than seventy feet deep, and an 18-foot deep vestibule had to be accounted for, the lobby must have extended all the way through the remained of that structure, and the auditorium must have been in the taller building behind it. So even if the building that housed the entrance has been demolished and replaced (and I don’t think it has,) the former auditorium is apparently still standing.

Joe, some more info for all to enjoy (I hope). You have done quite well trying to figure out the L-shape buildings involved. The lobby structure was torn down about 10-15 years ago.

The auditorium is, indeed, the “skating rink” structure with rounded roof. It was down 25th street, 2nd building on east side. The corner building was not involved, unless it would have been some over-sized Misc Stuff.

In the 1960s, the corner building and auditorium were used together as a Shaver’s grocery store. I well remember entering the store, and noticing the sloped floor further in. The ceiling was higher back there, too.

Now, both structures are condemned by the city, and would already be gone….but Omaha doesn’t have enough demolition dollars.

We downloaded 1958-era aerial photos of this neighborhood about 2 months ago, and still couldn’t figure out what the auditorium was, for sure. Since we didn’t know how large that theater was, I thought there was a skating rink in the auditorium building. In Omaha, old skating buildings usually had that classic rounded roof.

Eerie: About 6 months ago, I walked up to the watt-hour electric meter on the auditorium building, and was amazed how much electricity was being consumed. This for a sealed, condemned building. Ex-Air Force, I’ve learned to expect unusual situations. What a perfect place to hide some critical back-up computer or communications equipment, connected to buried cables no one can see.

Many buildings in that bustling business niche were always unrented even when I was a young lad. I think urban sprawl was already doing a number on our city back then.

The 1946 magazine article was super, and we saved a file copy. We carefully back up our files all the time. Some of this info is priceless. I’ll try to more at a later time.

Later today: Sorry, folks, I had it a bit wrong. The 1958 aerial photo has a detailed street map on it. Not only did it confirm that alley was always there, but it labled what parts of the 2 buildings were the North Star Theater. The east 1/3 of the corner building was the old lobby area. Now it makes more sense, after looking at the Google street view some more. Tonight, that street view is even more direct, and I can see the bricked in area.

When a kid, I never paid attention to that alley being there. The 1958 image doesn’t show it very well, so we assumed it only went in ½ block from Taylor Street, which is next street south of Ames Ave

Although the city map claims the other 2/3 of corner building belonged to someone else, I wonder if the theater used that remainder for heating, ACing, and other closed-off operations?

My parents didn’t go to that theater, even though they were living close by since 1947. The many neighbors must have presumed kids wouldn’t be interested in that history, but I would have been, and would have remembered tidbits shared.

The downtown State Theater was another one that kept the dark and gloomy ceiling/wall atmosphere to the end, and I’d always wonder how the daytime cleaning crew could do their work. That was a large, classy place, but the gloomy aspect must have been liked by the adults.

Architect H. A. Raapke is listed in the archives of the Nebraska Board of Examiners for Professional Engineers and Architects as Henry A. Raapke. I’ve been unable to find any online source other than Cinema Treasures giving his middle name as Arthur. His drawings are signed H.A. Raapke.

In an article about Raapke on page 17 of the May, 2016, issue of Nebraska Libraries (PDF here) author Angela Kroeger notes that she, too, was unable to find any other source giving Arthur as Raapke’s middle name.

A selection of Raapke’s early drawings (1899 to 1907) can be seen in this online exhibit from the archives of the Criss Library at the University of Nebraska at Omaha.