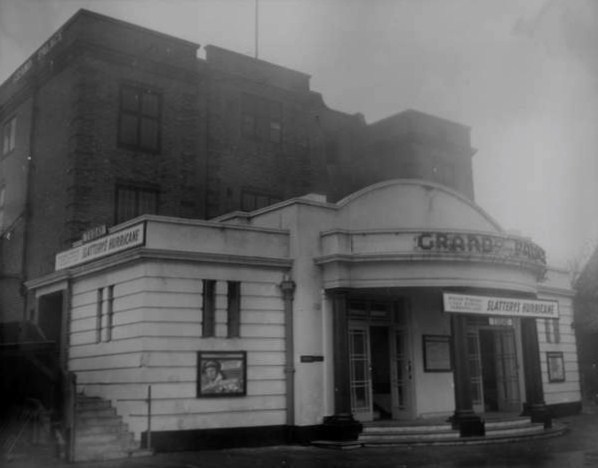 The Grand Cinema Palace opened in June 1922 and was a large handsome hall seating just under 1,100 in the stalls and 308 in the balcony. The auditorium was 130 feet long and relatively narrow, although the front stalls were considerably wider that the rear / balcony area. An additional entrance for the front stalls was provided in Granville Road where there was a glass covered canopy. There was a small variety stage and orchestra pit. It was refurbished in 1932 and taken over by Eastern Cinemas (General Cinema Finance) in 1937 and quickly passed to the J.F. James Circuit. By 1943 it had been taken over by the Oscar Deutsch chain of Odeon Theatres Ltd. 1943. It was renamed Gaumont in 1950.

It closed as a cinema on 27 October 1973, not long after the Odeon had been tripled.

It was then acquired by Chequers Bingo Club (who had moved from the former Chequers Cinema in the town centre) and used as a bingo club until the sale of the building to a developer forced closure in 1987. It was demolished soon after and replaced by flats.

The building had not been significantly altered during its life and remained a good example of an early cinema, retaining its orchestra pit, original square proscenium arch and internal plasterwork.

Some scanned images of the interior of the Gaumont cinema as the demolition team began work circa 1987:–

And one exterior when operating as the Chequers Bingo Club:–