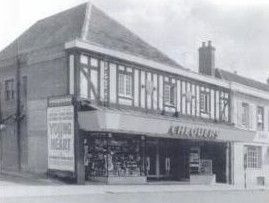 In St. Albans, Hertfordshire, the Cinema was erected in just seven weeks by builders Ezra Dunhams. It replaced Adey and White’s Brewery.

The Cinema opened on Saturday 20th January 1912. There was a single, sloping floor, in a hall that was 36ft wide by 90ft long. The walls were of brick, and the floor of cement, while it was claimed that the carpets were made out of paper that was said to be water and fire proof. The entrance was between two shops and there was Tudor-style decoration above. With possible theatre use in mind, space was left for a stage and dressing rooms. The seating capacity was 799.

In January 1927 the Cinema was acquired by Captain Frederick A. Webb and renamed the Chequers Cinema.

Early in 1933 the auditorium was extended at the screen end into the space left vacant for possible theatre use. This increased the seating to 1,000.

In the 1950’s the Chequers Cinema was adapted for CinemaScope releases. However, in 1962 the cinema was purchased by a property company for conversion into a supermarket. The Chequers Cinema closed on Saturday 30th June 1962 after a week’s run of two re-issues, “Young at Heart” starring Frank Sinatra and Doris Day, and Guy Madison and Vera Miles in “The Charge at Feather River”.

However, permission for change of use was turned down, on the grounds that a comprehensive redevelopment of the area was pending. So the owners granted a year’s lease (with an option to renew) to Panton Film Distributors, who, after redecoration and reseating, re-opened the Chequers Cinema on Saturday 1st December 1962 with “The 300 Spartans”, starring Richard Egan and Ralph Richardson.

Unfortunately, the cinema became starved of good, current product and had to rely on revivals and lesser releases. Finally, after the double bill of “Portrait of a Mobster” starring Vic Morrow, and “His Majesty O'Keefe” with Burt Lancaster, on Sunday 18th July 1965, the Chequers Cinema closed for good.

The building re-opened as a bingo hall on Friday 23rd July 1965. This was a success, but in 1974 the building was compulsorily purchased by the council. The proposed demolition was delayed, and bingo returned for a while, but the building was adapted to form part of The Maltings development in 1983. The canopy and mock Tudor frontage were removed and three shops created. At the rear, two storeys of shops and business premises have been created.