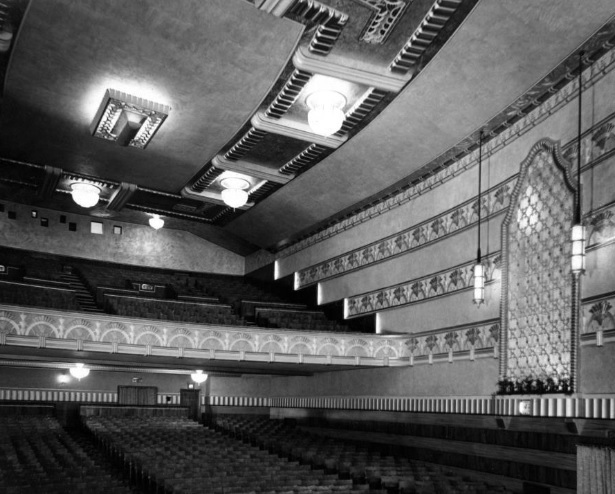 Located in Ulverston, Cumbria (the birthplace of comedian & film star Stan Laurel). Situated on the edge of the town centre the Roxy Cinema is a glorious survivor, when it opened as a cine-variety theatre on 21st June 1937 with Jeanette MacDonald and Nelson Eddy in “Rose Marie”. It had a 30 feet wide proscenium, a fully equipped stage and five dressing rooms. Built for and operated by the James Brennan Theatres Ltd. chain. Originally seating 1,250, with 850 in the stalls and 400 in the circle. It was equipped with a Western Electric(WE) sound system.

The auditorium was split horizontally in 1975, with bingo in the stalls and the cinema in the circle, but retaining the original atmosphere and Art Deco style fittings of the period. This does not however extend to the comfort level and technical equipment – new seats, projection and sound systems have recently been installed. The Roxy Cinema also has a new 43 foot (in CinemaScope) screen, which is the largest in Cumbria.

It is well run by the Northern Morris Circuit (since September 2006). There is an enthusiastic local film club, Film Club at the Roxy Cinema, which organizes a regular series of non-commercial films, which are screened at the Roxy Cinema for one night. Well worth a visit!

The bingo club in the former stalls closed in August 2007 and this part of the building was converted into a carpet showroom. On 19th April 2009, the Laurel & Hardy Museum relocated from their original home established on King Street in 1983, which had become too small. Its new home was housed on the former stage of the Roxy Cinema, and had its own 15 seat cinema which screens Laurel & Hardy films. The Roxy Cinema continued unaffected.

In 2014, the former carpet store in the stalls area had closed and the space was taken over by the Laurel & Hardy Museum. The duo’s classic films are now shown on a large screen, and the museum also hosts live performances.