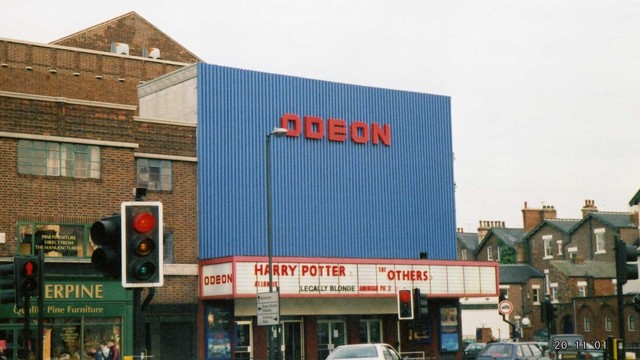 Originally on this site was the Majestic Cinema (which has its own page on Cinema Treasures). The Gaumont Palace Theatre in Hall Gate at the corner of Thorne Road, Doncaster opened on 3rd September 1934 with Jesse Matthews in “Evergreen”. It was designed by architects W. E. Trent and W. Sydney Trent. It had 2,020 seats in stalls & circle levels. It was equipped with a full stage 67 feet wide, a fly-tower for scenery and 11 dressing rooms. It was equipped with a Compton 3Manual/10Rank organ, with an illuminated console on a lift which was opened by organist Hebron Morland. There was also a large café/restaurant and above the café/restaurant windows on the façade was a frieze of posed figures in a bas relief sculptures by Newbury A. Trent depicting “the progress of a film from its conception, the writings of a scenario, the building of a set, to the shooting and completion”.

The Art Deco style auditorium was extremely elegant with panelled walls, a curvaceous ceiling with lighting troughs, and a noted painted safety curtain by artist Frank Barnes, depicting the railway industry prevalent in the town. During the late-1960’s and throughout the 1960’s the Gaumont staged many ‘pop’ concerts, including, Buddy Holly, The Beatles and The Rolling Stones. Although it was modernised in 1964, there is much of the original still remaining.

The Gaumont was tripled in 1973, with two mini-cinemas under the balcony (seating 144 each) and the main screen with a still impressive 1,003 seats in the former circle and front stalls. This was to retain the use of the large stage. The sub-division of the Gaumont gave the Rank Organisation the excuse to close the old Odeon in the town on 7th July 1973. Normally the Odeon name would be passed over, but it remained a Gaumont, and was one of the last Gaumont’s to loose that name when it became the Odeon 1987.

The Odeon was closed on 10th April 2008 with the final film screened being Sean Faris in “Never Back Down”. It has been sold to a local company Lazarus Properties, who specialize in town centre re-developments. They had no plans for use of the building at the time of closure, but in February 2009, plans were proposed to demolish and build a casino. Attempts were made to save the building, but these were overturned.

Demolition was in October/November 2009. The bas relief sculpture on the façade was saved, but was then ‘lost’. It was found a few years later in a council building yard. In 2019 it was awaiting renovation and a decision on where to display it. This was completed in 2020 and is now on view in the town.

have you seen the front today?! they have taken the metal of the front! its showing its old front again!

A view of the front now the blue cladding has been removed (the metal framework still remains), they haven’t been careful in the removal as some of the stone blocks have been knocked off (nothing that can’t be repaired quite easily).

We, the undersigned, request that the planning permission granted for the demolition of the former Doncaster Odeon (previously known as Gaumont Palace Theatre) and that for the construction of a new building on the same site be withdrawn, in the interest of preserving Doncaster’s history and heritage.

A few scanned interior images of the Gaumont / Odeon taken in 1988 – the building is currently being torn down (October 2009).

What a tragedy just a flat piece of ground where it stood.

I have several posters from this theatre for stage shows in the mid 1970’s some say Gaumont others Odeon.

My friend Richard Isaac was deputy manager here whilst the Gaumont, Barkers Pool, Sheffield was being refurbished in the mid 1980’s I think Paul Archer was the manager at the same time. Paul was a really knowledgeable man about cinema too. I miss them both.

It was demolished for a new Casino development, as of July 2016, it has still not been redeveloped and is currently a car park.