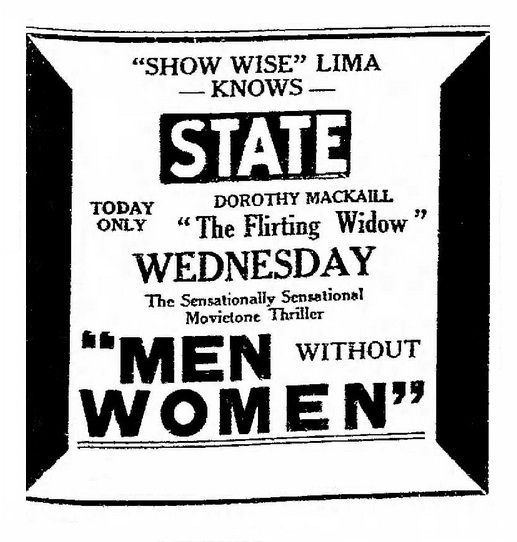 Originally opened as the New Orphium Theater in 1908. It was reopened as the State Theatre on February 16, 1927. By 1941 it was operated by Warner Bros. Circuit Management Corp. It was closed and razed in 1955 to make way for a parking garage.

This is from the Lima News dated 5/29/55. There should be an aka of Orpheum Theater, also an address change to 118 W. Market.

Plans for the building, owned by Miss Jessie M. Boone, Lima; William K. Boone, who lives in Mexico, and Mrs. Frances B. Holland, Miami, Fla., are not known. Leases held by three other businesses having space in the building also expire Aug. 31. Mrs. Margaret McBarron, manager of the State, will return to the Ohio as assistant manager, a job she held prior to moving to the State in April 1953. The other Warner theaters in Lima will absorb as many of the other 16 State employes as possible, Elliott added.

The State Theater on W. Market St. closes tonightâ€"perhaps forever. Stanley-Warner Theaters, Inc.,operator of the Ohio, Sigma and State in Lima, has decreed it be closed The lease on the building expires August 31. The future of the building is uncertain.

The State’s marquee will read “Closed for the Summer.” But it’s likely the theater never again will open its doors to movie fans. Maybe this is a good time to point out that, if the closing is final, it means the end of a long and honorable 50-year hitch in the Lima entertainment world.

THE STATE today is what is referred to in the theater business as a “second run” movie house. Yesterday (figuratively speaking) it was the Orpheum Theater of the old Gus Sun Vaudeville Circuit.

Those were the grand days of vaudeville, when from seats selling for 10 and 20 cents, Limaites of the teens and ‘20’s, applauded the monkeyshines of the teen-aged Marx Brothers, watched the incredible juggling feats of young W. C. Fields or sniffed decorously but nevertheless stayed to watch such animal acts as “Algie and Her Lions.”

Al Jolson did his blackface songs from the Orphcum stage. Fred Allen, a juggler then, performed while keeping up a running commentary of wisecracks with his audience. A Keith Circuit act known as â€œJewellâ€™s Mannequins,“ an early version of Howdy Doody, danced at the end of strings for a week’s stand in 1912. Then there were "Power’s Elephantsâ€, described by a former stagehand as "three or four mangy bulls,‘ who lumbered around on the Orpheum Stage for a few performances, generally terrorizing the other acts on the same bill.

AH. YES! Those were the days before the movies “killed” vaudeville. The Orpheum was built about 1906, on the site of the W. K. Boone homestead The Boone heirs still own the land and the building.
Unti1 1929 it was part of the Gus Sun Circuit, then was transferred to the George Settos Co., current owners of the Ranger Theater, when movies started making heavy inroads on vaudeville. For a year, Settos ran first class vaudeville acts interspersed with “flickers,” and then George Ritzlet of Lima, who was then operating the Sigma, took it over, put in sound projectors and converted it to the State Theater, a movie house only.

In 1931 Warner Bros, acquired the lease and throughout the 1930’s the State was one of Lima’s “first run” movie theaters. But for several years now, since Warners acquired the Sigma and Ohio (now
“first run” theaters) the State has been relegated to “second runs.”

There was a photo of the State in the Lima News on 7/27/55, shortly before its demolition:
http://tinyurl.com/y8avpps

I would have to disagree with that. The photo is as reasonably clear as a fifty year old archival image can be. Since there are no photos of the State currently posted, at least this gives us some idea of what the structure looked like. Seeing as I had to search for the photo and then get some facsimile of it online, the dismissal as “nonsense” is rather galling.

I guess it’s time for a CT break. No sense going to the trouble to get abused for doing so. Have fun, everybody.

The Orpheum Theatre at Lima, Ohio, was being mentioned in The Billboard and Variety in 1908.

Note the address of 118 W. Market Street given in kencmcintyre’s earlier comment, as well as the missing AKA.

I’ve found this house listed as the New Orpheum Theatre as early as 1911 and as late as 1924. I don’t think it means that this Orpheum was rebuilt at any time. A list of Gus Sun’s theaters in Frank Cullen’s Vaudeville Old and New has six houses called the New Orpheum, and several other theaters in the circuit had the word “New” as part of their names. Apparently, Gus Sun was just partial to it.

February 16th, 1927 grand opening ad as State is in the photo section.

I have a postcard of an “Orphium Theatre” [sic!] in Lima, Ohio. It’s a card with an undivided back, making it possible to date it as pre-1907. The building depicted says “Bank of Lima Building”, with no hint of a theatre name… Maybe this is the “old Orpheum” that is discussed above? Does anyone know where this has been?

I’ve found a number of references to this house, and several others, as the Orphium Theatre, mostly in the 1907-1910 period. The references are too common and occur in to many different publications to have all been typos, so it looks like the spelling Orphium was actually used by quite a few theaters for a while. Most of the houses using the variant appear to have been part of Gus sun’s circuit. There might have been some legal conflict between Sun and Martin Beck’s Orpheum circuit over the use of the name.