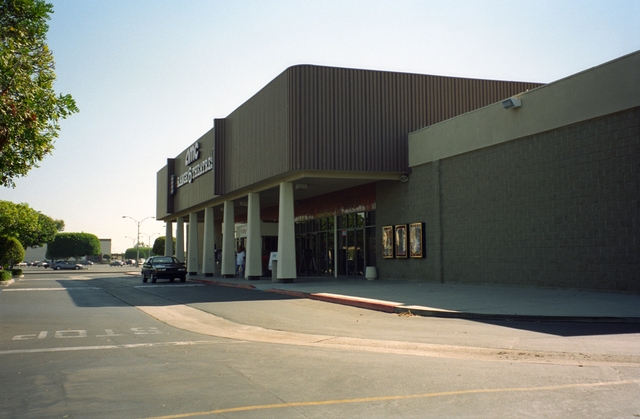 When the AMC Orange Mall 6 opened on December 16, 1971 it was billed as the West Coast’s first six-screen complex. The Orange County Register said that of AMC’s 203 theatres, this was their sixth six-screen operation.

This came a few years after they opened a four-screen complex in La Habra with irregularly shaped auditoriums and poor sight lines, which indeed made movie going there “complex”.

The 1800 seats at the Orange theatre, which was situated in a separate building outside the mall, were divided among rectangular auditoriums, giving a vast improvement over their effort in La Habra. My positive memories of the theatre were the super-fast, well-staffed concession stands which gave you almost immediate service. Among the opening movies were crowd-pleasers of the 70s such as “Billy Jack” and “The Summer of ‘42”.

The last day the Orange Mall 6 was in the theatre listings was April 20, 1997. The building was later demolished.

If my memory serves me correctly, this theatre and the old Broadway department store were torn down for the construction of the Wal-Mart now at the mall.

This theatre was dreadful and typical of AMC’s 1970s fare. Tiny screens, tiny auditoriums, mostly mono sound, picture slide ads and terrible presentation. The seats were pretty uncomfortable. AMC spent very little time to design this theatre, and very little money to build it and it showed. It had no curtains over the screen, unlike the much more luxurious Cinedome on Chapman Avenue (also demolished). The staff, as I recall, seemed like they wanted to be somewhere else.

It’s hard to believe that AMC built so many of these similar theatres in the Southern California market and thrived with such mediocrity. I’m not sure if AMC pioneered the idea of slide show ads prior to a movie presentation, but even as a kid, I found these obtrusive to the movie experience.

It wasn’t until around 1987 that AMC took some planning, time and money and built some nicer theatres like the MainPlace and Century City 14.

The La Habra theatre, as I recall, was just as dreadful as the Orange Mall 6. There was another one in, I believe, Cerritos or Norwalk called the Alondra 6. I was a kid when these theatres were doing some good business (since they were usually very small, it was easy to pack the auditoriums on a Saturday night). At least in the case of Orange, there were two great alternatives in the Cinedome and City Center.

Still, the ‘ol Orange Mall 6 held some fond memories for me being a kid growing up in nearby Anaheim Hills. Since it was close and very inexpensive, most of our parents could drop us off there during a Saturday matinee. The theatre used to run some second run or return engagements of recent films like “Star Wars” and “Airplane,” and used to run most of the Disney releases/re-releases.

One of my friends hadn’t seen “Star Wars” yet, so he and I went to see it at Orange Mall 6 in 1979. He wasn’t impressed by the movie! Come to think of it, it didn’t have the same feeling as it did when I saw it at the Orange City Center Theatre. Bingo! We were watching “Star Wars” in a tiny, cramped theatre in 35mm mono sound. When I saw it in 1977, it was shown in 70mm Six Track Dolby Stereo. Talk about a difference in how one experiences a movie.

I saw a lot of the Disney re-issues here. And I think the first Dolby Stereo presentation I saw there was “The Karate Kid.” I recall being excited that this theatre finally had stereo sound. I’m not quite sure when AMC installed Dolby Stereo, but even after “Karate Kid,” they didn’t seem to run a lot of films in the format. By that time, I was going to the Cinedome much more often anyway.

The double feature on the right was advertised as showing at the Orange Mall 6 in October 1973:
http://snipurl.com/205zn

AMC ran the theatre as a relatively successful discount house in it’s later years. It’s closing coresponded not only with the mall’s redevelopment, but also with AMC’s expansion of their Fullerton venue. The staff and management were offered positions at the Fullerton 20 (expansion opened a couple of weeks after the Orange Mall 6 closing), but only one individual accepted the offer.

I have great memories of seeing movie here when I was a kid, including “Hot Lead and Cold Feet” with Don Knotts, “Hooper” with Burt Reynolds, and “Superman II."
As a teen I got to see lots of great horror movies here such as "A Nightmare On Elm Street,” “Dawn of the Dead,” “The Evil Dead,” and “Friday the 13th The Final Chapter.”
Also, Midnite Movies were a big deal at the AMC Orange Mall 6 Theaters, showing stuff regularly on Saturday nights like “Rocky Horror,” “Eraserhead,” and “The Song Remains the Same.” Good times!

This is from Boxoffice magazine in August 1971:

I had the nonor of being the closing House manager when the little closed. I actually got to open the Marina Pacifica 12 and close the Orange Mall 6 within a 3 month period..good times. I remember a crew from Florida carving up the theater and taking the seats and equipment to South America. The lobby had a huge hole in the floor and some guy walked thru this incredible mess and asked the memorable question. “What time is the first show of "Evita?”

I still remember the first movie I saw at this theater when I moved to the area back in 1984…. Night of the Comet.

My friends and I used to hang out at this theatre. Also, used to go to “The Rocky Horror Picture Show” when it was shown there.