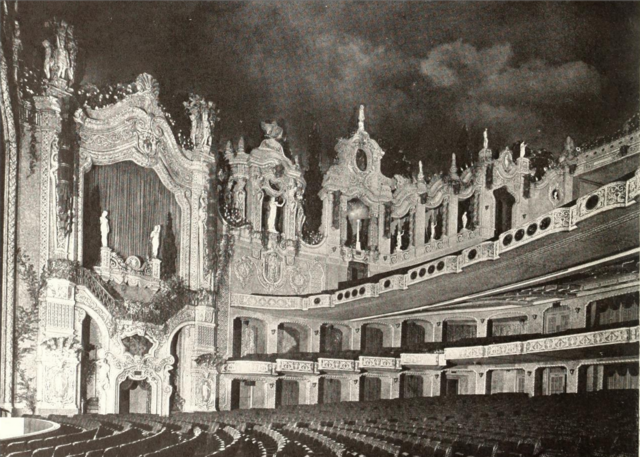 Located on the corner of Adams Street and Huron Street. The Paramount Theatre opened on February 16, 1929, with Richard Dix in “Redskin”. Seating was provided for 1,589 in the orchestra, 394 in the mezannine and 1,426 in the balcony. It was equipped with a Wurlizer 4 manual, 20 ranks pipe organ which was opened by organist Dwight Brown.

Designed in French Renaissance/Atmospheric style, it was one of only a handful of Atmospheric style theatres designed by the Chicago based architectural firm Rapp & Rapp. Although it was a beautiful theatre, the Paramount Theatre never fulfilled its potential, and for most of the time was a loss maker.

It was closed as a regular movie theatre on November 5, 1960 and was converted into a Cinerama theatre. It was closed on November 3, 1963 with “How the West Was Won”. The Toledo Paramount Theatre was demolished in September 1965. The site is now used for car parking.

Click here for an exterior view of the Paramount Theatre in 1930.

The photo on this page is not what it says underneath.It is actually Eberson’s Riviera Theatre in Omaha,Nebraska which is now called Rose Blumkin Performing Arts Center.

After looking at it you guys are right. I talked to a guy some years ago that worked for the company that demolished it. He was just out of the Army and it was his first job. He remembers it and he said it was shame they tore it down for a parking lot. But at that time there was a lot of movie screens in downtown Toledo and with the drive-ins. Thank God they saved the Valentine and restored it. At one time that was going to be demolished also.

Just uploaded two photos and ad from opening of “This is Cinerama.”

I was born in Toledo and my father was able to get one of the music stands from the orchestra pit. I current have “custody” of it. Unfortunately the paint was removed but is is in good working condition (light works)and decorative trim is great conditions.

I had read that the Block family of the Toledo Blade had been foremost in rallying to demolish the Paramount for parking for their employees. True or not the Blade layed off their workers after out sourcing their printing, what a shame. Short sightedness led to the loss of a architectural treasure. Toledo tried to make up for their stupidity by remodeling the Valentine. That effort although generally nice was not a restoration but more of an interpretation. They left an open ceiling which I personally thought was tacky. The new glass lobby doesn’t fit with the original architechture. For example they simply painted the old outside brick wall that used to face an alley leaving part of an unused fire escape, tacky again. The Fox in Detroit was a true restoration. It is by far a better example of true theater architecture. Toledo has made several bad descisions when it comes to preservation and revitalizing downtown.

The original Rapp & Rapp auditorium was one of the most magnificent in the atmospheric style by any architectural firm. I would guess that it must have been hacked-to-death for the installation of Cinerama and reduction of seating capacity. I hope that I’m wrong.

The Old Wurlizer 4-20 Organ Was Later Taken By Virgil Howard In Lombertville, Michigan In The 1980’s. A Segment Of WTOL Channel 11’s Heartland From August 15th, 1986 Was Found On YouTube.