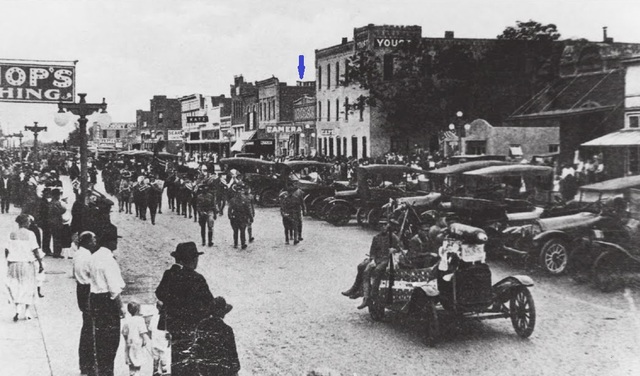 A fuzzy 1939 exterior shot can be seen by typing in word “camera”,
View link

Chester Gould (creator of “Dick Tracy”) attended OSU, and I once heard that he picked up extra cash during his college years by painting movie posters for Stillwater theatres. If one of these posters could be located today just imagine what its worth would be.

Chester Gould also lived in Northern Illinois for quite some time.
The McHenry/Wonder Lake area. I think he lived there until his death. There was a small museum dedicated to him there that closed up a few years ago.

The Reel Journal of August 7, 1926, had some information about the Camera Theatre: “E.B. Tull has increased the seating capacity of his Camera Theatre at Stillwater, Okla., from 300 to 400. Mr. Tull will erect another theatre building in Stillwater in the near future.”

That September, Mr. Tull leased the Camera to Roy H.H. Russ, and I find no later references to him, so perhaps his second theater was never built. Roy Russ is mentioned in the February 3, 1951, issue of Boxoffice, which said that he had sold the Camera Theatre to Johnny H. Jones and his sister Ruby Jones of Shawnee, Oklahoma.

A brief item about the death of Roy Russ appeared in the May 3, 1952, issue of Boxoffice. It said that the Joneses had remodeled the Camera and renamed it the Crest.

The June 29, 1957, issue of Boxoffice ran an article about Johnny and Ruby Jones which said that they had bought the Crest Theatre in Stillwater in 1951, and operated it until 1954. One Boxoffice item that year said that Jones sold the Crest to Griffith Amusement and Claude Leachman’s Video Independent Theatres. I’ve been unable to find any mentions of the Crest after 1954, so unless it got another name (and if it did, I’ve been unable to discover it) it might have been permanently closed that year.

719 is the left half of the Territory western wear store. It looks nothing like Oklahoma Historical Society photos and also looks newer (as do the two buildings to the right. The original Camera has probably been demolished.

Johnny and Ruby Jones of Shawnee, OK. indeed did purchase the Camera Theatre in 1951 changing the name to Crest. After a major remodel and overhaul, the theatre was operated by sister Rosalind Banks and husband Doyle. (The Jones family operated the Ritz and Jake Theatres in Shawnee at the same time). In 1954, the Joneses became partners with Video Independent Theatres in Shawnee taking over all the Video operations in Shawnee and forfeiting the Crest in Stillwater. This satisfied Stillwater Video partner Claude Leachman.