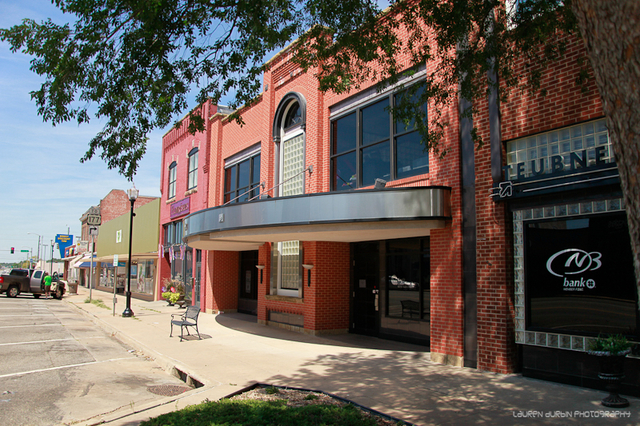 The Aggie Theater was opened in August 1926, and was located on the northeast corner of 7th Street and Main Street. As of 1992, the site was occupied by Teubner and Associates.

Vintage 1927, 1938, 1950, & 1980 interior/exterior photos can be viewed by typing in word “aggie”.
To see the Aggoe Theatre after conversion to Center Twin Cinema type in words “center twin”.
View link

The Aggie was built for the Griffith Amusement Company in 1926, according to The Reel Journal of June 12 that year.

The January 24, 1948, issue of Boxoffice reported that the Aggie Theatre had been gutted by a fire on January 18. The house was rebuilt.

The fire led to a delay in completion of the Leachman Theatre, then under construction. Equipment intended for the Leachman had been stored on the second floor of the Aggie building and was lost to the flames.

Gates Corgan was the architect of the Aggie Theatre. The house opened in mid-August, 1926.

Despite the current building’s somewhat theatrical look, it is not the original structure occupied by the Aggie Theatre/Centre Twin Theatre. This paragraph from a brochure for a walking tour of historic downtown Stillwater says the Teubner & Associates building was built after the theater was demolished in 1994:

“The Aggie Theatre was located at 619-621 South Main from 1926-1980. The building was built by Dr. D.H. Selph and leased by the Leachman and Griffith Brothers. In 1980 it was changed to the Centre Twin theatre, but closed in 1987. In 1994, the building that housed the Aggie and Centre Twin was demolished, and Teubner & Associates took over the space, while maintaining the old theater look.”

The brochure (PDF here) mentions several of Stillwater’s theaters and has small photos of a few.