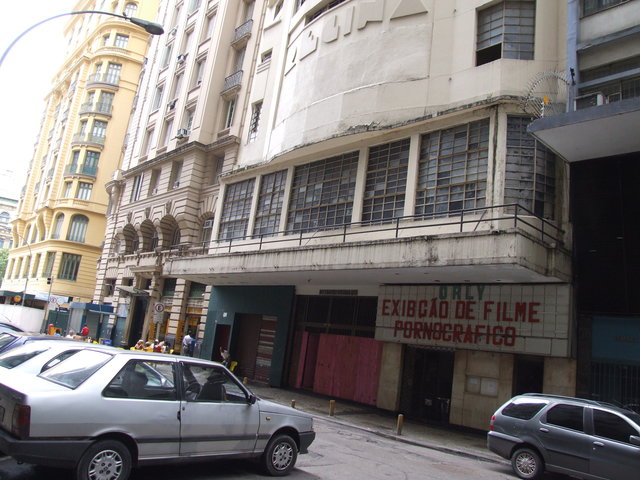 Located in the Cinelandia district in the centre of Rio in the same block, and around the corner from the massive Cine Rex. This Art Deco style building has the name ‘Regina’ on its facade over the entrance. It opened as the Teatro Regina on 5th December 1935 with the play “La Banque Nemo” (The Great Banker). On top of the 20-storey high facade is an Art Deco style ‘crows nest’ platform feature, which due to the narrow street, cannot be seen from street level.

The Teatro Regina was badly damaged by a fire on 2nd July 1944. It was completely refurbished and re-opened with seating provided for 568 in orchestra and two balcony levels. In July 1946, it was re-named Teatro Dulcina. It was renovated in 1981 to the plans of architect George Robson Goncalves, but didn’t reopen until March 1984. It was closed in 2001.

The Teatro Dulcina was reopened as a live theatre on 2nd August 2011 after a complete refurbishment.

In recent years a former galley space on the right side of the ground floor of the building has operated as the Cine Orly, which screens gay male adult films to an appreciative audience.

This book excerpt discusses the Cinelandia area in Rio:
http://tinyurl.com/26q344

Wow Ken, thanks for the excerpt. It was pretty interesting.

When I was in Rio with my friends two years ago we stayed in a condo a block from the boy bar in Copacabana which is also right next to Ipanema. We never made it to Cinelandia nor can I say we knew much about it. Even if we had, I don’t think we would have done much exploring there. Crime is Rio is quite prevalent and you have to be very careful where you go and when. The description in your excerpt made it sound very dicey.

In Rio, Cars do not stop at traffic lights after 10PM. ATM’s stop working after 8PM to cut down on robberies. We were told to always take cabs after dark and to never take the subway at any time. Being from New York, I usually take those admonitions with a grain of salt, but I didn’t here. I actually saw two people robbed on the beach.

Be that as it may, I have to say we had a fantastic time. The Christ Statue, the cable car to Sugar Loaf Mountain, the beautiful beaches and the fantstic food were incredble. And it was so inexpensive! I would absolutely go back, but I wouldn’t let my guard down. Thanks again!

Regarding the 2/19/08 comment by Luis, the first time I was in a cab in Rio the driver went through the red light, in fact he sped up as he approached the signal. This was about eleven p.m. in Ipanema. As you might expect, I was a little perturbed.