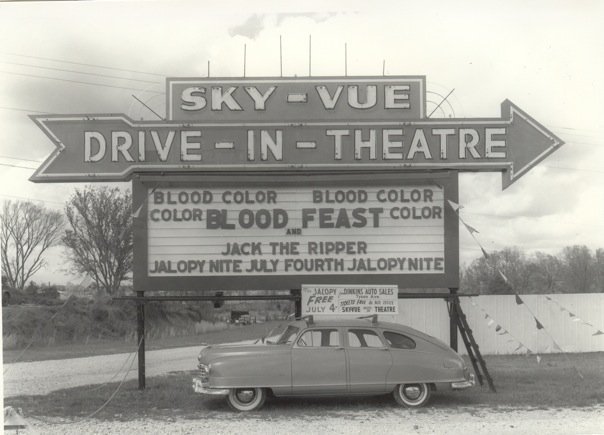 The Sky-Vue Drive-In was built in the early to mid-1950’s. I was born in 1953, and always remember it being there. It was owned by the Martin Theatre chain until about 1970. When they closed it, it was soon reopened by a local businessman, who operated it successfully until about 1985, when the land was sold, and a Hampton Inn was built on the site. Martin Theatres also owned the Capitol Theatre in Paris, which it closed at the same time as the Sky-Vue Drive-In, and for most of the 1970’s, the Sky-Vue Drive-In was the only movie theatre in Paris.

In the early years, they were open 7 nights a week year round, and would show ‘A’ movies Sunday through Wednesday and ‘B’ movie double, triple, or quadruple features Thursday, Friday, and Saturday. I have great memories of seeing Bowery Boys triple features and horror triple features when I was very young. By the late-1970’s, they were only open seasonally and on weekends after an indoor theatre was built in town by the owner.

The Sky-Vue Drive-In remained very popular however, until land values rose to the point where the owner probably received an offer he couldn’t refuse for the land. The theatre was located adjacent to railroad tracks, and especially in the early years, you could almost always be assured of one or two trains going by right behind the screen and around the side of the field, but sadly the railroad tracks, like the Sky-Vue Drive-In are now gone. The only link left is that the Hampton Inn on the site now named one of their meeting rooms the Sky-Vue Room.

Approx. address for this drive-in was 1502 East Wood Street.

I worked there around the mid-60s when Martin Theaters owned it. Giving away an old green Nash seems VERY familiar. Hated it when they had all-nighters: a bunch of 3rd run movies and I had to keep a picture on the screen until the last car left, or sun came up. Thick fog closed us down “early” a few times. A lot of time spent maintaining speakers for the cars.