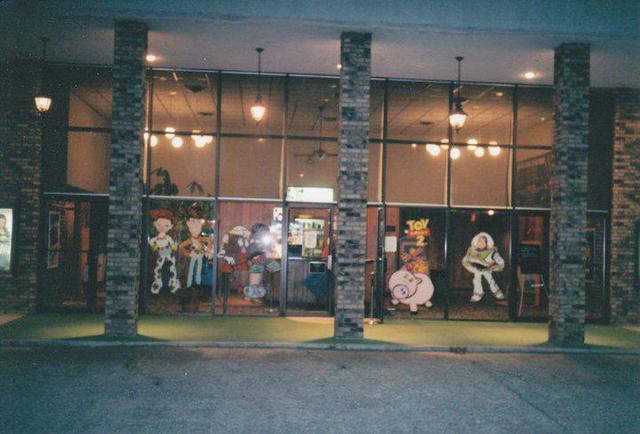 The Paree Twin Cinema was opened sometime in the late-1970’s or early-1980’s. It was the first indoor theater in Paris since the Capitol Theatre closed around 1970. It was operated by the same man who had kept the Sky Vue Drive-In open as the only theater in Paris for virtually the entire decade of the 1970’s. I’m not sure if the exact date it opened, but I remember seeing “Porky’s” and “Alone In the Dark” there, and they were both released in 1981.

It closed sometime in the 2000’s, when it was essentially replaced by the Parisian Theatre, which opened a short distance away. The main features I remember were the glassed in lobby with a big chandelier, and the fact that the parking lot was not level. You essentially had to drive uphill to pull out of the parking lot and onto the street. It was built close to a very sharp curve on Mineral Wells Avenue, and sometimes it was hard to get in and out of. At some point, a Super Wal-Mart was built across the highway, which increased traffic considerably, and may have been one of the reasons the decision was made to close the theater, and re-locate nearby, as I believe the same owner opened the Parisian Theatre.

The theatre stood empty until 2011, when it was demolished. As a personal note, at about the spot where the theater sign stands, was once a small house where many years before, when the area was basically a small rural community called Fariview, and Mineral Wells Avenue was a 2 lane road with virtually no businesses, my parents lived there when I was born, and where I spent the first few years of my life.

I visited this theatre in 1979, June I believe. I traveled down with a friend from Murray KY, we were trying to see how this theatre’s attendance was, as it had just opened in the prior year. The owner in Murray was worried that this theatre took away from customers traveling to Murray for a movie inside instead of a drive-in. We’re sure it did. The film I sat in on was “Wanda Nevada”. I recall the screen looked like it was ‘painted’ on the front wall… and was the size of a postage stamp, almost like a 16mm image, not 35mm. The film distributors verified they ran 35… but it sure didn’t look like it.

Thats a good story GMNash,maybe the movie was filmed in 35 mm,and was copied to 16mm.

I was told, after this visit, that the theatre ran 35mm only… it’s just that the image didn’t look like 35…. looked like a small 16 image.

I would love to get inside this one.Must have been one different moviegoing trip.

I was not impressed, Mike.

Maybe some pictures will show up,but i trust your word,it must have been a real dog.

Well, probably better than not having an indoor cinema at all.

The building was demolished last year after sitting empty for quite a few years. I do remember the screens being small and they were high up on the wall, making it difficult to see if you were in the first few rows. I always preferred going to the Sky Vue Drive In with its big screen, but having grown up in Paris, people were very excited when an indoor theater opened up after not having one for almost a decade, and it was very popular for many years. Oddly enough, this is the first indoor theater in Paris I am aware of that has actually been demolished, as the buildings housing the Capitol, Princess, and Gem, all in downtown Paris and much older, are still standing.