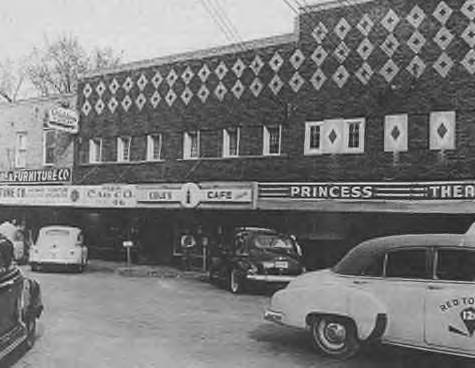 The Princess Theatre was part of the Nashville based Crescent Amusement Co. circuit and opened on January 5, 1940. It was destroyed by a fire in April 1946. It was rebuilt and operated until its closing in December 1955. It became a shoe store for many years. It has since gone into other uses and by 2019 is a medical center.

Here is a link to a photo and story about the Princess:

The Princess probably closed in the mid 50’s. I was born in 1953, and I can remember the Princess looking pretty much like it did in this picture, although my first memory of it was that it was already closed. It was on the corner of North Brewer and East Washington facing North Brewer. The actual entrance and box office was just to the right of where the photo ends. The theatre facade was intact for quite a while after it closed, then it became a Butler and Harbor’s Shoe Store for decades. Accordibg to the article it was still a shoe store in 1995. Since then it has been used for a variety of businesses including video arcades, restaurants, and I think briefly a bar. I’m not sure what it is now. You can’t really tell by the photo, but to the right of the building is East Washington Street, which goes steeply downhill, and there was a level of the building below the street level of Brewer Street, with some small businesses facing East Washington, some of which are still in use. The last time I noticed there was at least a barber shop and a small office open. The building appears to still be structurally very sound, and has remained in almost constant use since the theatre closed. I don’t know when it was built.

The September 14, 1940, issue of Boxoffice reported that the Crescent Amusement Company had bought the Princess from Ben Diggs, and would subsequently close their Gem Theatre, which they had opened only the year before.

In its issue of April 13, 1946, Boxoffice reported that the Princess Theatre at Paris had been destroyed by fire. I’ve found nothing about a rebuilding, but it must have been done as there are later mentions of the Princess being in operation.

The December 24, 1955, Boxoffice said that Crescent had closed the Princess. I’ve found no later mentions of the house in Boxoffice, so this closure might have been final.

Having noted all this, I have to add that Boxoffice indicates that there was an earlier Princess Theatre in Paris. Late 1944 and early 1945 items about the death of Capitol Theatre manager Hal Laurence say that he had come to Paris thirty years earlier to manage the Princess Theatre. They also reveal that Laurence had been the owner and operator of the Dixie Theatre, and was retained by Crescent as manager of the house after they bought it and changed the name to Capitol in 1938.

Too bad the photo link does not work anymore.

The Princess Theatre building is currently being utilized as a medical clinic (The Neighborhood Clinic), and the building has been nicely restored. I have uploaded some current photos of the building.