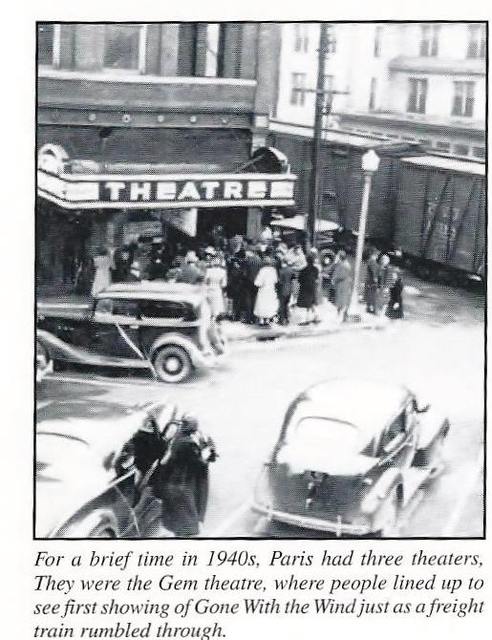 The Gem Theatre was a very short lived movie theater that was located at the corner of West Washington and Fentress Streets. That would mean it was located in the old Crete Opera House building which is still standing and now owned by the Henry County Board of Education. I don’t believe the Crete Opera House ever showed movies, only live performances. I believe that the entrance was on West Washington Street. It would have been across Washington Street from the now demolished Caldwell Hotel, and across Fentriss Street from the still standing Greystone Hotel.

It was open in the late-1930s and listed as closed in the 1941 & 1943 editions of Film Daily Yearbook. At that time there were 3 movie theaters in downtown Paris. I was told by my uncle that the best and newest movies always went to the Capitol Theatre, then second run/not quite so new movies went to the Princess Theatre, and that the Gem Theatre usually played older movies and/or B westerns. He was not sure how long it was open, but it was not long. I would like to know more about it.

The May 27, 1939, issue of Boxoffice had this item: “There is an unconfirmed report that Tony Sudekum of the Crescent Amusement Company will soon open a new house in Paris, Tenn., to be known as the Gem. He is now operating the Capitol Theatre there.”

The story makes me suspect that Crescent Amusement opened the Gem only to weaken their Capitol’s rival house, the Princess, and the acquisition of the Princess was their goal all along.

I jumped the gun with my speculation about the motivation of Crescent Amusement in opening the Gem. The December 9, 1939, issue of Boxoffice says that the Princess was still under construction at that time and was expected to open January 1, 1940. The Gem was opened before the Princess.

I’ve been unable to find confirmation in Boxoffice that Crescent closed the Gem immediately after acquiring the Princess, but I find no mentions of the Gem after the September 14, 1940, article. Since it is listed as closed in the 1941 and 1943 editions of FDY they probably did close it in 1940. That means it was probably in operation for a little over one year, from late spring or early summer of 1939 to late summer or early fall of 1940.

According to the website below, The Gem Theatre was the first theatre to show GONE WITH THE WIND in Paris.

Actually, Dixie was the original name of the Capitol. I would like to see evidence that the Gem was renemed the Dixie. I have wondered if there was ever an African American movie theatre in Paris, as in the shameful days of segregation, African Americans had to use separate entrances and seating areas to attend movies at the Capitol and Princess