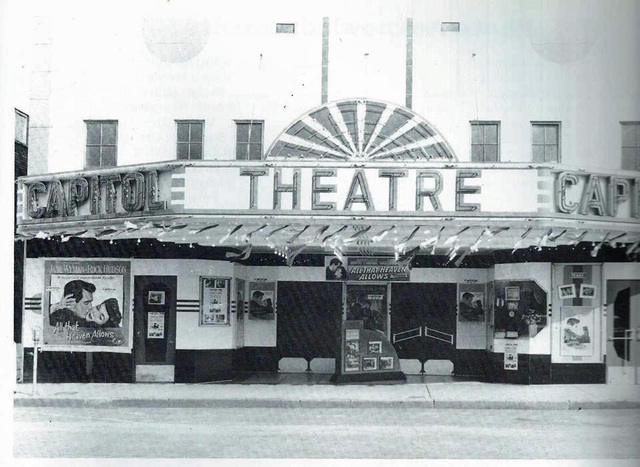 Opened as the Dixie Theatre, it was renamed Capitol Theatre in the early-1930’s. It was still in operation as late as 1968. I think this is the theatre in which the acclaimed British actor Basil Rathbone (Sherlock Holmes) performed on October 17, 1955. It was closed around 1970.

The Capitol closed in about 1970 or 1971. The last movie I ever saw there was “ANGEL ANGEL DOWN WE GO” which was released in 1970. It was part of the Martin Theatre chain. When it was closed it was first converted into a Fred’s Dollar Store, but later was purchased by Grace Episcopal Church, which is next door, and is still used by the church to this day, though the building is unrecognizable as a former movie theatre. The Capitol would show A movies Sunday through Wednesday, and B movie double features (my favorites!) Thursday through Saturday in the 60’s when I was a kid. Martin also owned the Sky Vue Drive In, and closed it the same year, but it was reopened soon by a local businessman, and lasted until the mid 80’s. I have seen old photos from when the theatre was used for graduation ceremonies by the local high school in the 30’s. It is possible that Basil Rathbone performed there, as there was a stage. My mother once told me that there was a personal appearance there by the actor Frank Lovejoy sometime in the mid 50’s

I believe that the Capitol was originally named the Dixie Theatre, but don’t know when the name was changed.

The Capitol was indeed the Dixie Theatre, according to Boxoffice Magazine. Late 1944 and early 1945 items in the magazine say that the late Hal Laurence, manager of the Capitol, had operated the house as the Dixie Theatre before selling out to Crescent Amusement, which retained him as manager, in 1938. However, there’s also a July 17, 1937, Boxoffice item mentioning the Capitol Theatre at Paris, so it must have been Laurence who changed the name.

The November 19, 1938, Boxoffice item about the sale said that the house had been erected and originally operated by the late T.B. Walker. The owner of the property at the time Crescent purchased it was Lavinia Walker, T.B.’s widow.

An item in the December 17, 1938, Boxoffice said that Crescent planned to build a new theater on the site, and the existing building would be “virtually dismantled.” But the January 13, 1940, issue said that the Capitol had been closed on January 6th to undergo a major remodeling, and that films booked for the house would be shown at Crescent’s Gem Theatre instead. The remodeled Capitol was back in operation later that year.

The December 1938 item also says that the theater had been built at the turn of the century, so I would imagine that Walker originally operated the house as a legitimate theater for touring companies, or as a vaudeville theater.

Bob, Chuck and Joe, it was exciting and interesting to find your comments about the Capitol. This was the first movie theater I that I ever entered and I still have warm memories of it today. I grew up in Camden, having been born there in 1958. The only movies I ever recall seeing with my father, who passed away in 1969, were at the Capitol, and they were: “CLEOPATRA” (1963) and “THE DIRTY DOZEN” (1967). I still treasure these memories. The one other film I distinctly remember seeing there was “HUSH, HUSH, SWEET CHARLOTTE” (1964) and on that particular Saturday it wasn’t my Dad, buta friend who I knew from school, Camden Elementary. During a very suspenseful beginning of a scene which came shortly after the carnage inflicted with a meat cleaver, as some young boys walking into the foyer of the old house, I was so started by the loud chiming of the grandfather clock that shattered the tense silence that I nearly jumped out of my seat, ejecting almost the entire contents of my box of popcorn sending it skyward before landing on me and my buddy. This was rather embarrassing, as you might well imagine.

I surprised to read that the old Paris, Capitol was at one time called the Dixie. There once existed a Dixie Theater in Camden, although I find no mention of it on this site. Maybe I’ll write to the Benton County Historical Society and see if I might be able to procure any photographs or information about it. I don’t know when it closed but my earliest memories of the old building which once housed the Camden Dixie were during its incarnation as Kuhn’s Variety Store. Kuhn’s was the nearest thing we folks in Camden had at the time to the much more well known but now also long gone Woolworth’s, in Paris. Perhaps some of you remember it, as well. I love the beautiful Court House in Paris which I saw again for the first time in many years during a trip back home a year ago last December. I felt grateful that this building, unlike the Capitol, appeared very much just as it did so many years ago when when I visited Paris regularly during my childhood. My father’s job with the Highway Department was in Paris and I also had relatives who lived there.

George, I grew up in Paris, and in fact believe I worked for your father at the Hwy. Dept. Was he Tillman Wiseman? If so, great guy. Spent many hours at the Capitol Theater growing up in the late 50s/early 60s. Sad that it’s no longer there.

In David Bowers “Encyclopedia of Automated Musical Instruments” p. 551 mentions the installation of a Reproduco organ (probably a photoplayer) at the Dixie Theatre, Paris Tennessee. There is no date on that reference, but certainly before 1930.

(Re Jaunuary 27 comments) Yes, Tillman was my father. I just read your comments today. If possible I would be interested in contacting you re your having worked with my father. You can write me at . Thank you very much. George

I have seen a photo of the Capitol Theatre from the 30’s showing OLIVER TWIST, which was released in 1933, which would seem to indicate it was re-named the Capitol in the very early 30’s. The name “Dixie” is still visible on the second story of the building, but the marquee has been changed to “Capitol”.