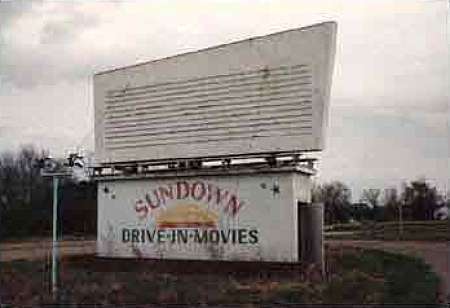 The Sundown Drive-In-Movies was located on Highway 79 South of Paris, about halfway between Paris and Henry. It was right across the highway from Huffman’s Barbecue Restaurant, which may still be there. It was opened prior to 1955 when it was operated by I.W. Boden.

One of my earliest memories is seeing “Old Yeller” there, when I would have been about four years old (1957 or 1958). The most memorable feature of the Sundown Drive-In was that the screen was curved, like a Cinerama screen. I don’t know when it was built or how long it lasted, but my next memory of it was when it was closed while I was still very young.

I don’t think it was in existence very long. The screen stayed up for some time after the theatre was closed, but was eventually torn down. I think it was used as a lumber yard for some time. I’m not sure what is there now.

I have discovered that he Sundown was actually in existance for a longer period of time than I thought. It may have been built during or shortly after World War II, as its location is close to Camp Tyson in the small community of Routon, which was a temporary army base during the war. This would mean it was in operation for at least 10 years.

Thanks bbrown,maybe Mike Rogers can get out his book and have somemore info on this drive-in.

this little Drive-in parked 200 cars and was run by I.W.Boden. There was the Skyvue Drive-in in that town also.

BBrown1,I have the Tazewell Drive-in on CT, It is located near the Cumberland Gap in Tenn. Do you have anything on that Drive-in.

My grandmother Anne Folkes Harris Boden and step grandfather I.W. Boden built the Sundown Drive-In Theater, Paris, TN, in 1948. The Bodens closed it in about 1964 shortly before my grandmother’s death that same year. (Prior to death, the Bodens partnered with my uncle, James C. Harris, III,in building & operating the Skyway Drive-in at Dickson, TN, which still may be in business but long sold to others.) As a kid from Nashville, I would visit my grandparents at the Paris Sundown and work in the concessions stand, projection shack & play ground. In the early years of theater operation, the Bodens provided unique entertainment for the customers' kids prior to showtime which began after dusk. While still daylight, donkeys with rope halters took the kids on rides around the playground built at the foot of the big screen. These gentle burrows were a carry-over from the Bodens' rural road show basketball & softball games played on animals during World War II. Many wonderful memories from the Sundown days!!!

Correction to above: The old drive-in name in Dickso was the MIDWAY Drive-In, not the Skyway, which now operates as the BROADWAY Drive-In. Another interesting aspect of the Bodens' opeation of the Sundown Drive-in in Paris is that the Bodens' home was in Springville, TN on the otherside of Henry County. In order to be closer to late-night closings of the drive-in, the Bodens returned from their annual trans-continental road trip to Hollywood (for contracting their upcoming season’s movies)in 1951 pulling behind their Cadillac the first long long RV house trailer ever seen in West Tennessee. They parked it in at the rear of the Sundown’s lot for conveniently “crashing” late at night after the shows. About the time they brought the RV trailer back from California, their was a Dezi & Lucille Ball color comedy movie released entitled “The Long Long Trailer”! The Bodens were the real life episode of that movie by way of their pulling that trailer all the way back to Tennessee over those 1950 roads!!!

Maybe David can confirm this. Before listening to the move on your car radio, between parking spaces there were polls with a couple of speakers. You parked, took a speaker off the poll and hung it in your car. I was told that before individual speakers, there were “blast horns” mounted on top of screen at the Sundown. I remember being told that when the breeze was just right, you could sit on the court square in Paris and listen to the soundtrack of the movie. (According to Google Maps, that’s about 3 miles as the crow flies.) I worked for Martin Theaters when they sold the property in the early to mid-60s. I helped move the stuff from the Sundown projection booth to the basement of the Capitol Theater. There was nothing left in concession stand, the contents having already been moved or vandalized.

I visited the former site of the Sundown in December 2018, and uploaded a few photos. There is a construction company there now, but you can still make out the approximate location of the field and screen. The highway that was 2 lanes when the drive-in was open is now 4 lanes, and I believe part of the field was taken up when the highway was widened.