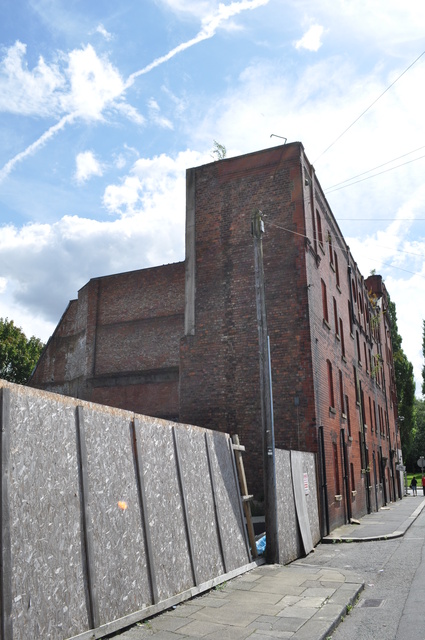 Designed by local architects Campbell & Horsley, the theatre was originally built for Richard Flanagan as a playhouse named Lyceum Theatre, which opened on Thursday, February 23, 1899 with the musical farce “Gay Grisette”. It is located on Church Street at the corner of Mather Road.

The façade is quite ornamental in Accrington brick and terracotta in a Renaissance Revival style. There was originally a tower feature on the left-hand corner (since removed). The foyer was quite small. The auditorium had seating on orchestra, dress circle, balcony and upper balcony (the gods), all supported by four cast iron columns on each level. At dress circle level there was a single box on each side of the proscenium which were set back with moulded plaster cornice. The decorative plaster fronts of the tiers were in an Adam style. The fire curtain was embossed with the Borough of Eccles Heraldic emblem. The 26ft wide proscenium surround was decorated to represent Shakespeare’s “Seven Ages of Man” while a panel above the proscenium had stencilled decorations of flowers and swags. The stage was 67ft wide and 38ft deep. There were 17 dressing rooms.

In March 1899, the Eccles public were treated to a ten minute Bioscope presentation, “The Spanish Bull Fight”. Originally, the theatre’s owners intended a more cultural entertainment of Shakespeare and operettas, however by 1900 the theatre began to put on variety and novelty acts.

In 1907, the theatre changed ownership to Broadhead’s Theatres chain and was renamed the Crown Theatre. In 1932 the Crown Theatre became a cinema, just in time for the “talkies”. The projection box was constructed at the front of the upper balcony. By 1937 it had become part of the H.D. Moorhouse Circuit.

In 1955, the Crown Theatre became part of the G.B. Snape Group of Assoc. Cinema Companies circuit and continued showing films until 1963 when it became the inevitable bingo house. For reasons unknown the stage house was partially demolished. On 16th April 2003, English Heritage awarded the Crown Cinema a Grade II Listed building status. Unfortunately the bingo club closed in December 2003 and has been shuttered ever since. Over the following years the condition of the building deteriorated due to lack of maintenance, and the decorative plasterwork on the ceiling collapsed caused by the building being no longer weatherproof. Plans were approved in January 2019 to convert the building into 80 flats, retaining the façade.

At 04:45am on the morning of 1st December 2019, the derelict building was destroyed by fire.

Latest news I have is that planning permission has been granted for conversion into apartments. Im not what, if any, original features have to remain?
Lets all hope that it wont be demolished entirely?

Follow this link to have a very sad look inside……

Local Residents and the people of Eccles have shown interest in Tidying up the site so it is in keeping with the Buildings Past and the areas future. Anyone interested please contact

If you want to get involved in ‘Help Save the Crown Theatre Eccles’(Facebook) please contact the Trustees of the former Crown Theatre,

From various sources, there has been a major fire at this building.

Article in the Manchester Evening News :–