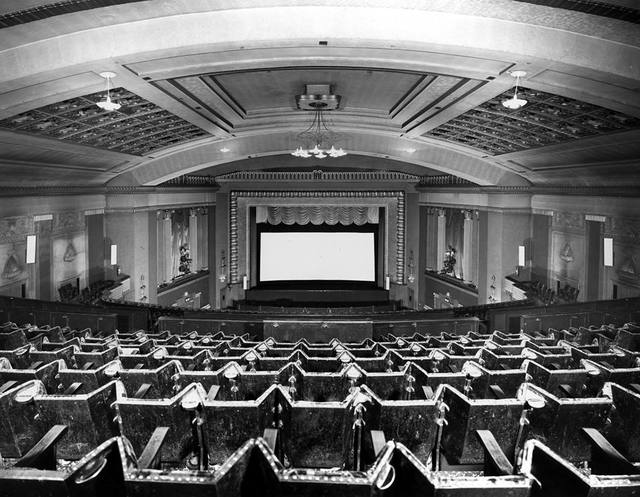 The Broadway Theatre was the bigest luxury cine/variety theatre to be built in Eccles and designed by architect Joseph Gomersall – one half of the pair of famous British cinema architects Drury & Gomersall. There was no expense spared for the Broadway Theatre which was built for the J.F. Emery Circuit at the cost of £70,000 a fair amount in 1932. It opened 30th July 1932 with a stage show and the film “Up For the Cup” starring Sydney Howard. It was equipped with a Christie 3Manual 7ranks theatre organ. There was a large restaurant.

The theatre was principally used for movies but was capable of taking touring theatrical productions and accomodating local theatrical groups and variety acts.

Amongst the famous names that appeared on its stage was George Formby.

In 1935, the cinema changed ownership to the little known Mancunian circuit. It changed hands once more in 1936 and became part of Union Cinemas. The final cinema circuit to own the Broadway was the ABC group (Associated British Cinemas)

The cinema closed on March 13th, 1974 and the last two films shown were "Big Boss" and "Soon the Darkness" (ironic).

The Broadway was sold to Kwik-Save Supermarkets in 1975. A false ceiling was built across the front stalls from the front of the circle

It was finally demolished in 2001 to make way for an access road and carpark for the new Morrisons Supermarket.

Ray (Millington) Can you recall when, roughly, you worked at the Apollo and the Ritz Stockport?

hi Derick. yes started at the Apollo as trainee from july 1966 until april 1967 when I transferd to eccles as 4th operator. when eccles closed march? 1974 I went to stockport from the until about November 1979. when I first went to stockport the manager was Mike ronan think the spelling is right & the chief Ken toombs not to sure I spelt it right. I noticed Derick on the ritz stockport site you were there as projectionist. nice to here from you Ralph did you ever know our friend Vic mancini used to come in at night and look for you? and derick how is the Curzon Urmston faring. as always nice to see everyone about regards to all. MERRY XMAS ray millington

Ray, about a dozen posts down you’ll see my email address. Send me yours and I’ll send some photos across.

Opened on 30 July 1932. When all the performances were eventually finished the opening film was “Up for the Cup”. Pop concerts were held here in the 1960s with Gene Pitney and The Kinks just two of the familiar names to grace the stage. In 1935 the chief operator was killed when two curtain weights fell on top of him.

What does a 4th operator do?

The 4th Operator or should I say Projectionist was a projectionist in training . In those days Projector film capacity’s was just around 2000 feet. In the old days with Main feature the B Film Adverts trailers Newsreel Cartoon These would involve at least 14 reels of films with manual change overs from one projector to the other. For normal shows The Chief projectionist Co-Chief 2nd projectionist and possibly the 3rd would do the running of the show. Whilst the 3rd and fourth would do the rewinding and any repairs to the print. They would also keep the projection box and room clean. The projection box used to be polished daily so if any film dropped on the floor it could be re-spooled without to much dust or dirt going on the print. In the UK when Selective Employment Tax was introduced. Work started in altering the systems to run single manning and long players attached to a projector leading to automation Hope this helps..

Hi Mike (Blakemore) You missed the bit off about having responsibility for making the brews. I always made sure mine tasted terrible, so I got off lightly most of the time. Lol.

Hello ex projectionists. 4th operators jobs make the tea, paint the floors, clean the boilers out, from time to time scrub the projection box floor and since the box floor at eccles was a light tan it took some scrubbing with a deck scrubber and then three layers of wax put on by hand what a pain. also 4ths job was to run the show and all the reels while the 2nd proj had a kip on the sofa in the staff room there. not enough energy to say more. ah well happy days.

regards to you all ray millington happily retired.

When ABC were taken over by Thorn-EMI, an extra element was added to the vertical sign such that it read, from top down: A-B-C-EMI. Later, the bottom segment was removed, along with the letters ABC. From then to closure it simply read E-M-I.

The circle restaurant, with its separate entrance, immaculate parquet flooring and fully equipped kitchen, was leased to the Arthur Murray Dance Studio franchise. When the franchise ran out, it continued under the name ‘The Court School of Dance.’ This business continued, until demolition, under the last owners; Bill and Barbara Benson. The doors onto the circle were covered in vertical, tinsel drapes. It was still possible to go onto the circle and see the top of the proscenium and everything else above the Kwik-Save suspended ceiling. The dance school moved to Irlam, for a while, before returning to Eccles Masonic Hall. Barbara Benson died in June 2013, following which Bill wound up the business and moved to Australia, to live with his brother.