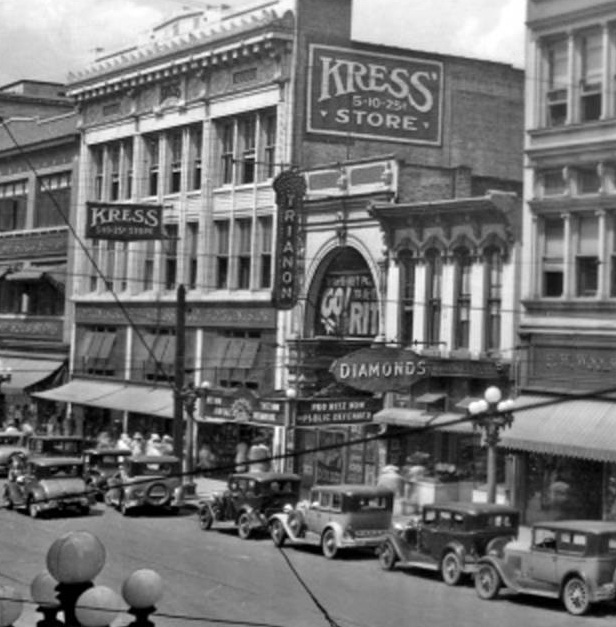 This original Trianon Theater must have opened around late-1910.

Again a case of looking for clues for me as to which studio this theater was associated; as most were in the Golden Era. The Trianon appears at the time of the 1928 photo to have been associated with 20th Century Fox. Notice the FOX NEWS ad on the right hand corner of the marquee area.

The building that housed the Trianon Theatre is still standing at 1916 2nd Avenue North. It appears to have been occupied when the Google camera car went by in June, 2008, but looked vacant when this photo, uploaded to Flickr on December 30, 2009, was taken.

H. M. Newsome completed the Trianon Theatre on Second Avenue North in 1913 according to two books of that era and then purchased the Bonita. Mudd & Colley Amusement Company took on the theater in 1916 along with the Strand from Newsome adding to their existing Princess Theatre there.

The Trianon went out of business in 1926 when the Ritz was used to supplant the Trianon. Mudd & Colley would be purchased by Karl Hoblitzelle in 1926 (finalized on January 13, 1927) becoming part of the Interstate Circuit. Soon thereafter, the Trianon had one more chance and reopened under new ownership likely as a sublease agreement with Interstate. (The operator was likely Richard M. Kennedy who had taken on the former Mudd & Colley Rialto in 1925 though not positive.) The Trianon was remodeled only to close again in 1932 probably completing a 20-year lease with the building repurposed for new retail use.

The October 31, 1912, issue of The Tradesman, a Chattanooga-based publication later to be renamed Southern Hardware, noted that a permit to construct a $10,000 movie theater in Birmingham had been issued to H. M. Newsome.

The installation was also mentioned in a classified ad for Pilcher’s Sons in the October 25 issue of Moving Picture World that year. The ad said that other recent installations included organs for the Hippodrome Theatre in Dallas, the Queen Theatre in Galveston, and the Vaudette Theatre in Atlanta.