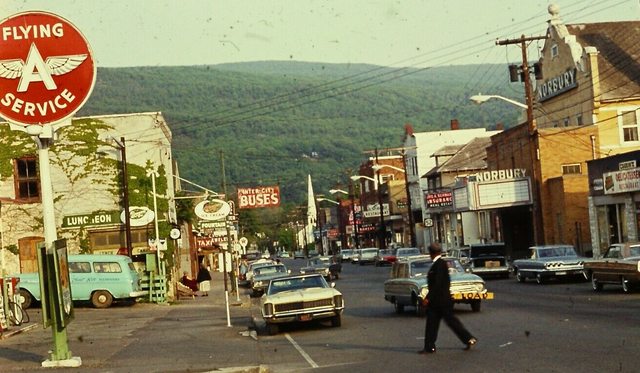 Listed as operating from at least 1941, the Norbury Theater showed first run films up until about 1973. It’s located one block from the Shadowland Theater, which continued to show movies until the early-1980’s and is now used for live performances.

I hope others in this area can provide more information on this theater.

I was in Ellenville recently, it looks like a car service is operating out of the front of the building. Not open for any kind of shows as far as I can tell

The correct address for the Norbury Theatre is 73 Center Street. The current occupant of the building is Abe’s Taxi Services, the same outfit that was there in the 1988 photo lostmemory linked to.

A book called “Wawarsing,” by Pamela Kuhlmann, has a postcard photo of this theater postmarked 1913, when it was called Norbury Hall.

The caption says that it became a movie theater in later years, but it doesn’t give the dates. However, the brick and tile front seen in the 1988 photo wasn’t on the building in 1913. The tile looks art deco, and as it was quite likely installed when the hall was converted into a movie house, that probably happened during the late 1920s or early 1930s.

This building is probably very old. The 1913 era facade is of a style that was popular in the 1859s and 1860s, but it looks like it was added onto an even earlier wooden building that could easily date from the late 18th or early 19th century.

In 1904, the Pioneer Fire Company wanted to build a clubhouse. Mrs. John F. (Sarah) Norbury was so generous that they named the building Norbury Hall. She was even given a Solid silver loving cup with the inscription"Presented to Mrs. John F. Norbury as a token of our regard and grateful recognition of her friendly interest in our welfare. Pioneer Engine Company, Number One, Ellenville, NY. Nov. 1904.

Thanks for unearthing the construction date for this theater, buckstadrusso. I guess methods of construction didn’t change very much over the decades in this small town. Now that I look at the photo again, I can see that what looks like a facade in one of the revival styles of the mid-19th century could also have been inspired by the Mission Revival of the 1890s.

The address for the Norbury Theatre still needs to be corrected to 73 Center Street.

The entrance to Norbury Hall is now around the back from where the cab company is. Live performances are held there occasionally.

A more recent photo of Norbury Hall illustrates this article from the Ellenville Journal.

This web page says that there will be an auction of antiques and collectibles held at Norbury Hall on September 30 (the page will probably vanish after that day.) I can’t find any other events scheduled for the hall, but anyone who wants to see the inside can go bid on some antiques.