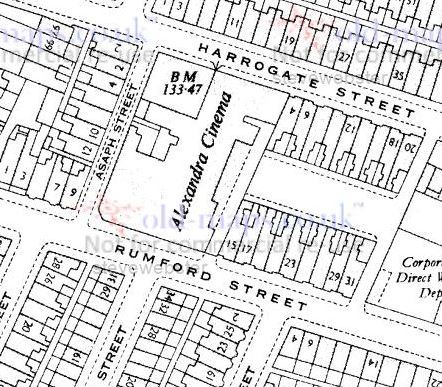 The Alexandra Picture House opened on Monday August 18, 1913 and cost 7,000 pounds to build. The local press described the theatre as being large, beautifully lit, and unique in its decoration.

In one of the newspaper advertisements, the theatre was described as being "under the direct patronage of H.M. Queen Alexandra" – the advert also carried the Queen’s royal crest, which in those days would certainly not have been used if it were not true. In 1926, it was operated for that year by the J.F. Emery Circuit.

Talkies came to the Alexandra Cinema in February 1931. It was around this time that the cinema changed hands and became part of the Ogdens Theatres Circuit. The new owners also had the Empire Cinema nearby on Trafford Road in Salford.

The Alexandra Cinema closed on 9th August 1959 with Richard Attenborough in “Sea of Sand”, yet another victim of television. The owners also closed the Empire on the same day.

Plans were proposed to turn the cinema into a club but were turned down by the Council and having stood empty for a couple of years, the Alexandra was demolished in September 1961.