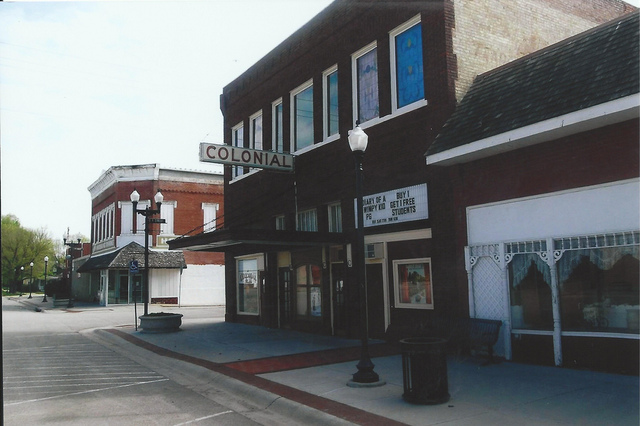 The Colonial Theatre was opened prior to 1926, when it was listed with a seating capacity of 450.

Must be a small theatre.

From the early 1950s a photo that captured the sign and front of the Colonial Theatre in Hamburg.

I have a friend from there I will ask about this theatre.

The Colonial Theatre at Hamburg, Iowa, is listed in the 1926 FDY, but no seating capacity is given.

The December 1, 1917, issue of The Moving Picture World had an item datelined Hamburg saying “Howard Cohen plans to erect a moving picture theater here.” That might have been the Colonial.

Or maybe not. The 1914-1915 edition of The American Motion Picture Directory lists a remarkable three movie theaters in the tiny town of Hamburg: the Empire, the Lyric, and the Favorite, any of which might later have become the Colonial.