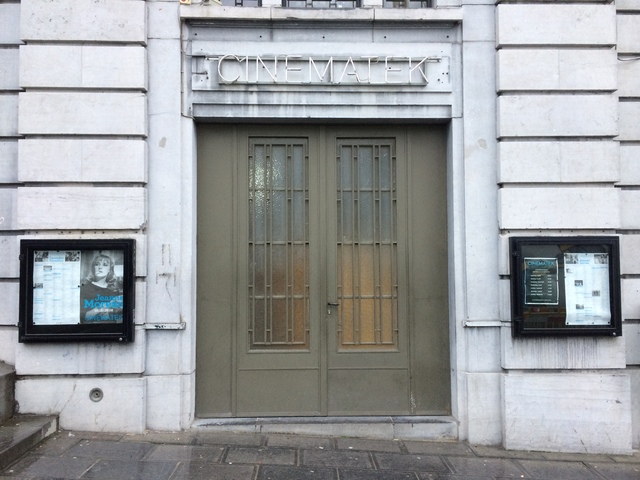 Musee de Cinema (Cinema Museum) is at Rue Baron Horta 9 in the Palace of Fine Arts (Palais des Beaux Arts) Mont des Arts in Brussels Upper Town. The Film Museum was created in 1962 in the former Decorative Arts Room of a building opened in 1928 and designed by one of Brussels' most famous architects, Victor Horta. The museum has permanent exhibits, 40 displays of photos and gadgets, tracing the development of early cinema. Most of the displays have a mechanism that allows the visitor to see how the gadgets work.

There are two auditoriums showing arthouse films and classics. Until July 2006, the larger auditorium had 125 seats and showed 3 "talkies" daily. The smaller auditorium showed silent movies with live piano accompaniment at 7 PM and 9 PM. When I saw the 1927 German comedy "The Student Prince in Old Heidelberg" on October 20, 2001, I counted 30 seats and I estimated the screen was 10 feet wide for the silent film.

The Cinema Museum closed in July 2006 for renovation. From September 2006, the Film Museum relocated to the Auditorium Shell at the Shell Building at 60 rue Ravenstein, also at Mont des Arts in Brussels Upper Town. The space occupied by the former two cinemas was a columned hall originally designed to display decorative arts, and has been restored.

With the new name of Cinematek, refurbished exhibits and new cinemas opened January 2009. Ghent architects Robbrecht & Daem dug underneath to create two new underground cinemas, with 117 seats and 29 seats. Unlike the old auditoriums, the new ones are steeply raked and have more comfortable seats. Unlike the past, both auditoriums are equipped for ‘talkies’ and a piano for silent films. The exhibits were also refurbished.

2007 exterior photo of entry, apparently while building is being renovated:
http://www.flickr.com/photos/aigean/886760553/