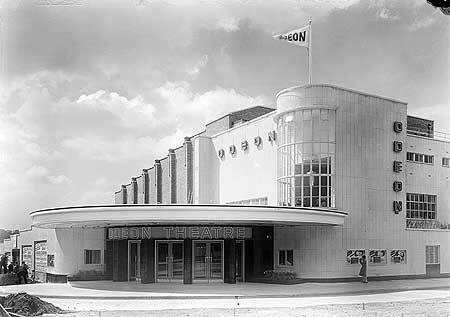 One of the original Odeon Theatres built for Oscar Deutsch’s Odeon Theatres Ltd. The Odeon Well Hall is located in the Well Hall area of Eltham, and stands on a prominent corner site at Well Hall Road and Rochester Way.

The Odeon opened on 20th May 1936 with Gene Gerrard in "Where’s Sally". Designed by architect Andrew Mather, who was assisted by Horace Ward, the building externally is a stunning Art Deco style masterpiece. The entrance is located on a corner of the building and has a wrap around canopy over the single storey entrance hall. To the right is a glass tower which contains stairs leading to the circle. Buff coloured faïence tiles are on the side of the building. On the left hand side, the brick auditorium block is left exposed.

Inside the auditorium seating was provided for 1,028 in the stalls and 578 in the circle. Bands of concealed lighting in the ceiling illuminated the space, and there were porthole-like light fittings on the side-walls. The decorative treatment inside the building was the work of noted interior designers Mollo & Egan. The Odeon had a 42 feet wide proscenium, a 12 feet deep stage and one dressing room.

The Odeon was divided into a twin-screen in January 1973 with 450 seats in the original circle and a small 130 seat screen located in the rear stalls.

From 1st November 1981 the Odeon was taken over by the independent chain;Panton Films and it was re-named Coronet Cinema. The Coronet Cinema closed on 13th January 2000 and has remained closed and unused ever since. In early-2007 plans were proposed to convert the building into a children’s play area and day care centre, but these have not been approved. In February 2011, the auditorium was demolished, leaving only the front corner entrance intact. By 2015, the entrance foyer had been converted into a gymnasium.

The former Odeon was a Grade II Listed building.

I was going to add a similar comment – but it is fantastic image, showing how it could look, and countering the “get rid of the eyesore” arguments which usually accompany any derelict building.

this I just found : looks like the auditorium would completely disappear just leaving the facade and foyer……

A set of photographs of the Coronet Cinema (former Odeon, Well Hall) taken in February 2009, showing the current condition of the Grade II Listed building, both externally and internally:
View link

A view from the circle in March 2009:
View link

The Eltham Society Newsletter for May 2012 says the flats built on the site are called Coronet Apartments, 6, Odeon Parade. They face a courtyard and on a blank wall a mosaic recalling Gone with the Wind and plant troughs resembling cinema seating have been provided.

This place was an absolute flea-pit; I last visited in 1991, and the person accompanying me, not well versed in technical aspects of film presentation, complained that the “sound is quieter than my TV”! Admittedly, it does look more attractive in old photos.

The developer had promised a small replacement cinema in the former foyer building, to be built in Phase II, with the apartments built in Phase I. However, after Phase I had been built, the developer applied for permission for use as a gym, which has now opened.

As for the courtyard “mosaic” artwork intended to keep the memory of moviegoing… I fail to see the point.

For me, rule number 1 of a cinema is that it should be indoors and has enough elements to create a good sense of expectation. Rule number 2, it should have excellent HVAC.

(Rule number 0, of course, is that it should have the ability to show films!)

I think that’s as polite as I can be about the development.

Looks like the original foyer (in particular, the floor) has been retained, now being used as the gym’s reception: