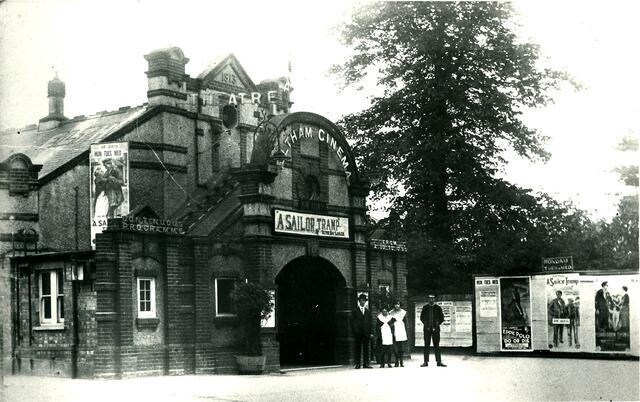 In Eltham, Southeast London, in 1912, architect Frederick H. Buen of Wanstead, representing The Eltham Cinema Company, investigated High Street Locations of a cinematograph theatre, including the possibility of a stable conversion at the rear of The Castle public house, or a new building on council-owned land next to The Rising Sun public house. In the event, a lease was taken on land near Westmount Road. The prime ‘mover’ behind the company was William H. Browning, a local estate agent.

The Eltham Cinema Theatre opened on 7th April 1913. One of the earliest films was the Italian epic “Quo Vadis”, for which there were performances at 2:45pm, 6:00pm and 8:30pm, with seats priced as 6d, 1 shilling and 2 shillings. During World War I, soldiers and nurses in uniform were given free admission.

Miss Lipscombe provided piano accompaniment. When she retired, her deputy Leila Crisp, took over full time. She later recalled the advice her brother Maurice, who was 2nd projectionist in 1919, gave her “When the action is quick, play quickly; when slow, play slowly - and if the film breaks down, for God’s sake keep on playing!”

In 1921 the company was amalgamated into the newly formed Kent Cinema Circuit, with almost the same directors. The following year they built the Palace Cinema in the High Street (see separate Cinema Treasures entry). Initially they retained the older cinema, mainly to deter any competition, but the writing was on the wall when talkies came along, and the Eltham Cinema Theatre was closed in early-1931.

After being unused for a couple of years, the building was put to use s a photographic studio, trading as Pattons Photo prints Ltd. Later use included, from 1949 to 1965, as a furniture depository by Hinds, a nearby department store.

In 1964 Woolwich Borough Council acquired the lease, and the building was demolished in 1968. An ambitious plan by the Westmount Theatre Trust for a theatre did not come to any fruition and eventually, between 2000 and 2002, flats were built on the site.

Although the cinema is long gone, Mr. Browning’s late daughter, Mary Wooton, donated one of its projectors to the Greenwich Heritage Centre.

(With grateful acknowledgement of extensive research undertaken by John Kennett)