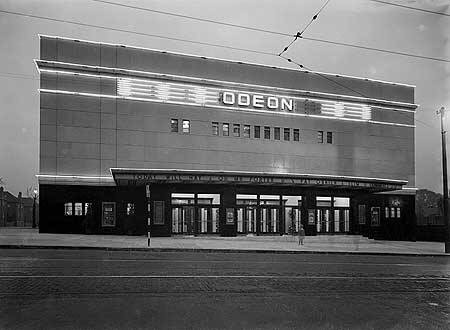 Located on Eltham Hill at the corner of Kingsground. The Odeon Eltham Hill was built for and operated by the Oscar Deutsch Odeon Theatres Ltd. chain. It opened on 14th April 1938 with Anna Neagle in “Victoria The Great”.

The facade is rather bland and is covered in sheets of cream and black glass. Inside the auditorium, seating was provided in a semi-stadium style with a seperate raised balcony at the rear that did not overhang the stalls seating. There were 883 seats in the stalls and 828 in the balcony.

It was closed by the Rank Organisation on 19th June 1967 with David Niven in “Happy Go Lovely” and Dana Andrews in “Duel in the Jungle”. It was converted into a Top Rank Bingo Club which operates today as a Mecca Bingo Club.

Images of the former Odeon / Gaumont as the Mecca Bingo Hall (May 2018) here:–