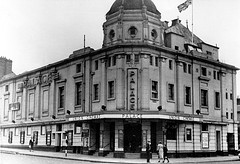 Located in the southeast London district of Eltham, on the corner of Eltham High Street and Passey Place. The Palace Cinema opened on 28th August 1922. It was an imposing building, somewhat looking like an old variety theatre, rather than a purpose built cinema. It was built by Thomas & Edge of Woolwich for the Kent Cinema Circuit Ltd. The dome above the corner entrance was covered in gold leaf and was topped by a powerful arc-light which could be seen in Forest Hill and Shooters Hill when it was lit up. Seating was provided for 1,300 in stalls and circle levels. The cinema contained a tea room, lounge and smoking room.

In 1934, the interior was remodeled by architect Robert Cromie and it re-opened on 13th August 1934. The Palace Cinema was taken over by the Union Cinema chain in 1936, they were taken over by Associated British Cinemas(ABC) in October 1937.

It was re-named ABC on 20th January 1964, and was closed on 29th April 1972 with Honor Blackman in "Fright" and Christopher Lee in "I Monster". The building was demolished later in 1972 and the site was redeveloped as a block of shops and office space.

A vintage photograph of the Palace Cinema while under the control of Union Cinemas chain in 1936:
View link

A vintage photograph of the Palace Cinema in 1946:
View link

Photographed as the ABC in 1972:
View link